I am trying to find a company that would change our squadron flash to MTP colours.

This company does embroidered badges (based at Bisley, so lots of team & club badges, etc), send them an inquiry. Karen is very good with her designs, etc.

If you are looking to get a unit badge authorised for wear on No 3, consider that the general approach is to take the centrepiece from the badge, rather than the badge itself, and make it subdued (or normally, just black).

do you know who authorises them and what the restrictions are?

how did you get your flash authorised and what are the restrictions? myself and another cadet are desperate for answers

That authority currently lies with the RAF Clothing & Dress Policy Committee. They decide what is authorised for wear on all RAF uniforms (which includes us in the ATC).

There are discussions going on in the background about delegating the authority for unit badges but nothing is set yet.

If in due course Squadrons are given such authority it will go in hand with the requirement to get the Squadron heraldic badge itself approved (since the unit badge is merely the centrepiece of the squadron badge).
This is also in a state of discussion as we may in the future have to get our badges approved by the College of Arms as the RAF do.
This would involve a significant cost to the Squadron and there are rigid guidelines with which the badge design must comply.

Also would be nice if a Sqn uploaded their unit badge on SMS/units it’s then pulled to the website as well as the ATC crest.(although this a very much a nice to have)

I like the idea in theory. Though, given the number of the utterly awful / copyright infringing / massively inappropriate unit badges out there, I’m not sure that in practice it would be a good idea to automatically publish those efforts to the approved public-facing advertisement for the organization.
If Squadrons would toe the blasted line it could work, but I fear that’s like holding back the tide.

If Squadrons would toe the blasted line it could work, but I fear that’s like holding back the tide.

But would this then enable to get the unit badges audited & compliant?

WEXOs could approve or even a volunteer bod classing unit badges as “formally registered, compliant, non-compliant”

However it is very much a nice to have.

Some sort of approval would certainly be needed prior to publishing in public.
That could most easily be achieved in SMS / Units (in the same way that cadet ID photos can be).
But again, it relies on Squadrons actually doing it.
I fancy that those who like their atrocity and insist on keeping it, despite having been told otherwise, would just not add it to SMS. That would at least mean that it doesn’t go public on the website, but it wouldn’t get us any closer to conformity.

I’ve been beating the “this is the correct format - I’ll help you” drum for years. I’ve still got loads of squadrons with bad badges.

Or actually trust the squadron commanders to put appropriate crest/image in place.

Or actually trust the squadron commanders to put appropriate crest/image in place.

Because that’s worked so well in the past…

Ok i will go with your cynical approach if you can provide examples of inapprorate crests, btw if OCs are not trustworthy then they shouldnt be OCs my point is stop trying to add extra layers of management to everyone just because of a few bad eggs

This may come as a surprise to some, but there are lots of staff in the Corps who don’t know or don’t really care about such regulations, and just intend to do their own thing.
The number of times we hear “it’s our Squadron motto”, “our Squadron crest”, “our Squadron colours”. Some people latch onto things despite them being inappropriate, and intend on retaining them on some misguided idea of “tradition”.

In just the same way that many OCs introduce all sorts of other unauthorised oddities like flight tabs, sashes, arm bands, special belts for Duty NCO…

Cynical!? Have you been in the Corps long?

Sometimes one can get away with dealing with “bad eggs” on their own. But when it comes to something which, if automatically published on the main website, could cause embarrassment, offence, or get the Corps sued, we can’t afford to. A simple approval is a very sensible precaution.
Where else would content go out to a primary public channel without some form of approval?

I’ve just had a quick look at the wing crests for central & east regions. South & East Midlands wing is non-compliant

Wrong colours & surrounded in a wreath. The other wings seem to be okay.

Norfolk & Suffolk is also technically non-compliant but only needs a couple of tweaks with just a different template that’s the right colours & a different motto needed as it’s already in use by another regiment. 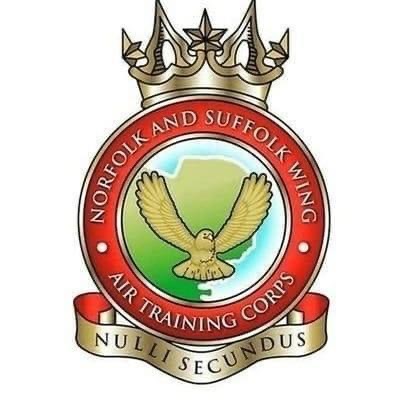 If wings aren’t correcting & setting the standard then squadrons are going to be even more diverse.

The number of times we hear “it’s our Squadron motto”,

Any examples of any particularly bad ones? Besides some pretentious Latin ones, I haven’t seen any inappropriate.

The vast majority really don’t care and I proudly count myself in that number. I’m perfectly happy for new badges to need approval but ones that have been out their for ages, unless they are grossly offensive (and I’ve never seen one that is) it’s been good enough for 70 odd years leave it alone.

Good examples thank you for taking the time to dig them out, no doubt crest were donexwith best intentions with litle guidance as not everyone are aware if the regs. Incidently the ONLY official way to get a crest approved is via college of heralds which understandably some squadrons wont want to pay as it is not cheap Incidentally we were only the second squadron to do this, it cost £350 but it meets all the regs. no copyright breaches even the then Commandant Air Cadets gave his nod of acknowledgement. Luckilly we git a grant to cover costs.

Now in my 30th year as staff so see it both ways, but also seeing too much layers of middle management of yeah/neigh sayers who hold no value apart from adding 10 once worth putting more workload down to the units, better empowerment with guidance is better than asking for permission every 5 minutes. Anyhow getting back on subject the ONLY offical route of approval for official crests is via College of Heralds (we were 2nd squadron in corps to do it) so WExO or any other peson who may have an opinion will not be able to give official approval and many are probably just as unaware of regs as the so called rogue OCs. Most crests are unofficial personalised to their unit, not to everones taste but aside from copyright rules are not controlled. Ultimately it will be up to the corps MCO team to decide whether they think crests are suitable for public viewing on new website so auto grab wouldn’t work and i cant see a line of volunteers to scrutinise all the crests so if they are not offensive dont fix what isnt broken. But of course there are sone who want to take the corps back to 1960s autocratic level of do as i say mentality.

In just the same way that many OCs introduce all sorts of other unauthorised oddities like flight tabs, sashes, arm bands, special belts for Duty NCO…

Cynical!? Have you been in the Corps long?

There are also wing /region/ corps staff who add their own oddities, wrong interpretations or uneccessary layers of bureaucracy then throw teddies out cot when challenged by OCs who actually know what they are doing. Been in corps long enough to know some care more about themselves being right than actually delivering to cadets. or simply 40 years. Remember it is a cadet organisation no one will die if a crest is slightly the wrong colour.

…but i do get what you’re saying. Having them on the main organisation website offers authenticity

official way to get a crest approved

I have always been under the impression that they’re badges and incorrect to refer to them asa crest?