What do the regs (RAFAC WO) say?

TL;DR: How should one answer a staff’s question whilst on parade?

I’ve been told that you should only be moving or speaking whilst standing easy.

come to attention when answering a question

I appear to have been an unreformed traditionalist on this: I was trained many decades ago that individuals constituting a static formed-up squad on parade, in the position of At Ease, bring themselves up to the braced position of Attention in their own timings when- talking, in response to a direct or collective invitation to speak raising their hand in response to a collective invitation to so do (or, rarely, as a self-directed action signalling that they wished/needed to speak) hand-c…

Thank you I was just reading through this, but since from 2019 I thought best to ask again. It would be great if the RAFAC WO could come out with something stating the correct way of doing things.

Secondly, you need to consider we use the RAF Drill & Ceremonial and when in the RAF, outside of training, Drill rarely happens apart from ceremonial events.

So the situation you are discussing isnt detailed in AP818 because in theory it shouldnt happen, all movements for easy, ease and shun mention not to permit unecesssary talking.

What you find is that who ever is Flt SNCO at Cranwell or Halton will have there own spin on it based of what theyve historically been taught.

The only time you would maybe have a conversation with someone whilst doing drill/parade in the RAF is during a Review, responding to questions from the reviewing officer at which point you would be stood to attention anyways.

Basically, theres no right or wrong way. Personally, i prefer individuals to be at attention but some times i permit being at ease or easy if it aids what im trying to achieve.

For example when i teach casing or uncasing a banner i would want it to be relaxed as the individuals need to be able to see and engage in conversation to fully understand the process i am teaching them. However if it was a general sqn parade night and OC asks a cadet a question. Id expect the cadet to come to attention, respond, then stand at ease.

And here endeth the first lesson.

Ok, thank you. The reason for asking is the way we teach on sqn the way I had discussed with my sqn SNCOs (staying at ease) with landed some of my cadets in hot water on a NCO dev. course over doing it differently to what the WWO said.

Never a truer word aha. Technically I was following the WWO just when they changed the other year the policy on this appears to have changed.

I thought RAFAC had its own way of doing right/left turning on the March to reduce chance of ankle injuries. Swivelling on heel instead of detailed in 818? If RAFAC did this surely we can issue something dictating a way to do this? 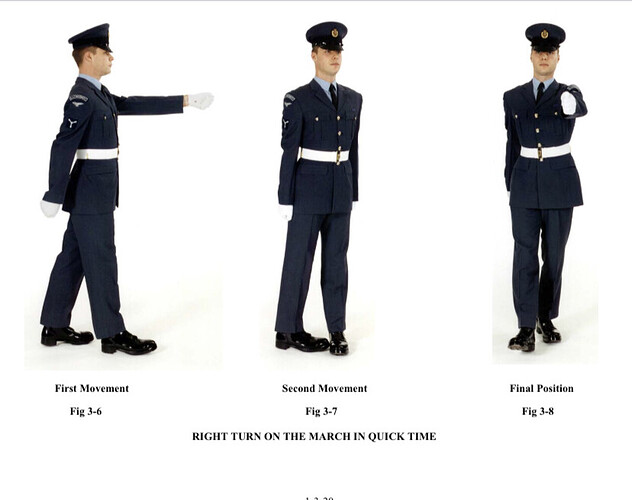 You have it a little backwards, we changed our turn to match 818, because ours was wrong.

So this is how we right turn? I’m only asking because I distinctly remember hearing about people being told off for this

Although people have a tendancy to stamp…that must be avoided.

Oh, I think you’re confusing about turn with left and right

Many years ago, I was on a staff learning drill course with the drillies from one of my former wings. It was aimed at people who had never been a cadet or in uniform, so for a former cadet was a bit basic.

Anywho, at one point, the person calling orders messed up and we would have marched into a wall or car or something, so we started marking time, as is the custom.

The WWO stopped us and asked us why we were doing that, we explained it was what we were taught, and he said it’s not in the drill manual, and shouldn’t be done or taught, it not being in the manual he explained because the situation ‘shouldn’t happen’.

So I asked him what we should do if it does happen, because it just did.

But what if it does, I enquired again, as it does happen.

I gave up at that point. He was clearly incapable of understanding the question.

So what would you do Alex?

Id rather they marked time to enable the IC to maintain control instead of a cluster halt.

There’s nothing in AP818 about answering questions or speaking whilst on parade, does that mean we just stay silent when asked?

Probably, according to that WWO.