Just curious, is there a template or any regulations for the email footers?

Short concise, who I am and my role, along with contact details.

Hyperlink format for the Teams is Join conversation and I googled to get the mini Teams logo.

I also don’t include a physical address as that is an outdated communication method.

Mine’s bilingual too (at least the “job” title and squadron name). Technically we’re supposed to treat Welsh the same as English in external comms.

Still only ever had one email in Welsh though…

Personally, no matter what a style guide says, I’m not putting my mobile number on mine.

The RAF state, inline with JSPs it should be formatted this way:

It keeps the size small in the email and looks tidy!

I’m considering buying a burner phone so that I can put a mobile number that I can be contacted on for advice without having Cadets/Parents getting my personal number.

Why bother putting RAFAC at all… #controversial

I don’t put any of my post nominals on.

A certain few individuals do… and it looks ridiculous.

Dear bob,
Can you help with my minibus tommorow?
Thanks
Jim

REDICULOUS plus that’s what SMS is for!

Why bother putting RAFAC at all…

well indeed. I am sure i read a AP/ACP which stated Postnominals are not to be included unless at a state level (ie OBE/MBE etc)

I knew some who put in
MSc, FRAeS, FInstLM, mCMI as a list of postnominals.

Some maybe relevant to RAFAC

That’s the relevant part of your paragraph.

The use of postnominals is to only use those that you have when you have a need to and to be clear nothing in the RAFAC needs postnominals!

So if you’re FRaES then use that when sending aerospace Comms in your aerospace job.

If you’re MCMI then this would be suitable for a management doc etc etc.

The only time when it is appropriate to add all your post nominals regardless, is on a CV and this is purely as it is a list of achievements and recognition.

Debretts has a very useful section on their website about postnominals and what order and when for example.

Yep, the relevant JSP states no postnominals in email signatures, but you can have titles

There are a few high-ish profile officers who I’ve seen put all their roles in their signature. It meant their signature was almost longer than any email they wrote. And yes, it looked utterly stupid

Fixed that for you.

But I must admit, those who bang their PNs on everything… including 1 moron who had them on a mug… need their heads read.

The RAF state, inline with JSPs it should be formatted this way:

Do you have a copy of that anywhere by chance please?
The most recent specific I have is RAF IM Policy Dec 2007 which still gives the “standard” JSP 101 format: 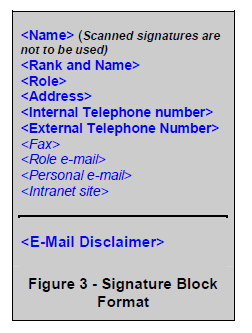 It would be useful to have something newer to reference for an upcoming course.

My personal pet peeve with email signatures is people who hold multiple roles but include every role in the signature, rather than just the role pertinent to the email… That, and the massive overuse of “for OC” in emails which are not sent on behalf of anyone.

Fixed that for you.

only in some cases…and is still a membership fee to be part of that club. the same relevant and experience is held without paying £200/year.

Joe Bloggs an engineer can pay the Institute of Mechanical Engineers (IMechE) £150/year and for that get a magazine and can put MIMechE as a post nominal.
just for paying the £150 - no checks Joe is an engineer, no check on Joe’s qualifications, experience, or otherwise.

much the same for the Royal Aeronautical Society (RAeS) and as an example - Member of the RAeS is a honours degree and 4 years relevant work experience, and then £245/year membership fee

my point being someone in the aviation industry working alongside team mates and colleagues are likely to all have the same/similar level of experience and qualification the only difference between someone with or without the postnominals is the willingness to fill in the application form and then continue to pay £245 every year.

I use these two examples but is broadly the same for other institutes i have looked into (when curious as to what some Postnominals indicate in emails I have seen)
although i except a “relevant and experience and knowledge level” is required in some cases, it is not a hard and fast rule, and there is nothing that stands out as a unique to a colleague sat at the next desk, other than paying the membership fee.

the real difference comes when looking at Chartered recognition and does require some serious extra effort and work to be put in to prove ones worth, but what is gained, in Engineering Terms at least, is a MIMechE to CEng and then £300/year - which if you choose not to pay = loss of the Chartership status until reapplication

I am not saying they are all mickey mouse, but the genuine ones are lost amongst the “easy to buy ones” which people then dilute the system with by adding as postnominals to appear impressive, and even then doesn’t distinguish someone from their colleague save for the willingness to pay the annual fee.

My wing have standardised the signature blocks and requested mobile numbers be included, which I have now done. I do, however, always remove it for emails to that particular person!