What year was the current CWO rank introduced?

Has any adult instructor been in the ATC long enough or know when the current CWO rank insignia was introduced to the ATC? (The one on the right

The one on the left was introduced in 1941 when the Air Defence Cadet Corps changed its name to the ATC.
But I don’t know when the Royal Warrant insignia was stopped being used for cadets and the Crown and leaves were introduced.

Does anyone know or be bothered to do a bit of digging to find out for me, because Google has no idea.
Is for the preparation of my presentation for my MOI on History of the ATC from 1938 to the present day. Which includes detail of the Insignia and ranks of the ADCC. 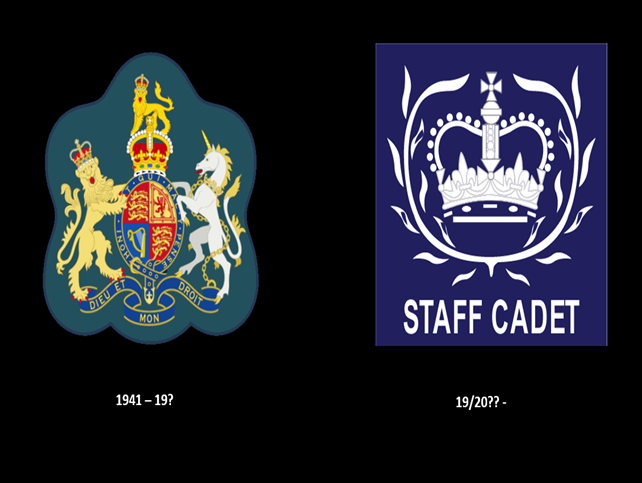 Well, the ‘Staff cadet’ bit will have been added post-LaSER review in the mid-2000s (I remember being an “Instructor Cadet” when I turned 18 and wearing white tabs with my rank slides, that was 2003). It changed to staff a few years later.

Instructor Cadet was certainly still around until late noughties at least. The switch would be whenever Master was introduced and the lanyard became MOI which I actually want to estimate at 2013?

It changed to staff a few years later.

Unfortunately I don’t know about the history of the crown and laurel.

I’m a decade out, I was thinking back when I was a cadet which was actually 2004…

Which includes detail of the Insignia and ranks of the ADCC.

Current pattern of CWO badge was introduced in 1958 I believe. Prior to that date cadets and AWOs were not permitted to use the royal crown. Cadet Flight Sergeants used the eagle in circle badge.

AWO as was moved to the single WO2 style crown from 1958. Prior to this they had an eagle in wreath badge. Those serving 8 years as an AWO were entitled to swap to the full Royal Coat of Arms badge after this time. In July 1988 this entitlement was removed with no further badge upgrades allowed. This has now changed to the current arrangements. 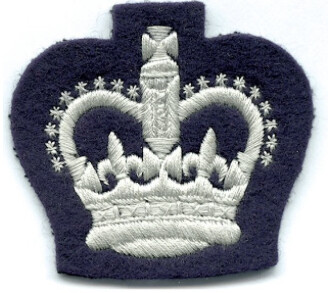 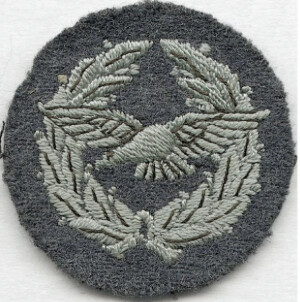 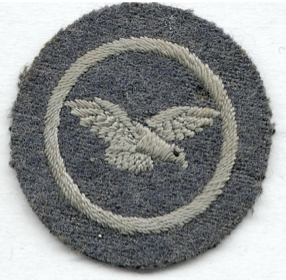 So I just looked back over Wikipedia edit history and it appears that the change happened in September 2010. Not sure how reliable that is but seems about right

Which is definitely a few years later

Don’t worry, I have researched the ranks. 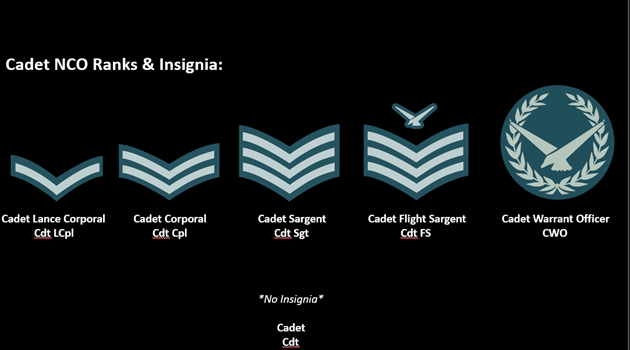 sorry to be a pedant but its Sergeant

The eagle/falcon within a wreath was used by adults from ww2 until 1958 when the crown badge was introduced.The eagle/falcon badge was then used for C.W.Os until the late 1960’s.
In the 1950’s most 18 year olds whould have been partaking in national service!!!

My source claims that CWOs used the current crown in wreath from 1958. They might be wrong though so interested in anything stating the former AWO badge was used by cadets. 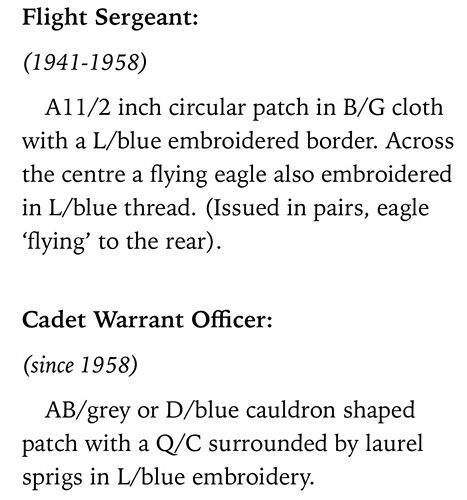 Separate question: Did the ATC actually have the rank of CWO pre-1958? My source states that ADCC did not have the ranks of FS or CWO contrary to the OPs presentation slide. Again the source could be wrong so would love to find out more. 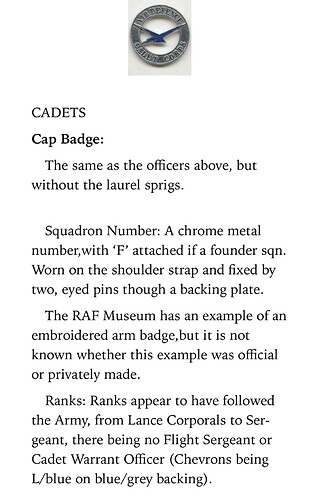 I posted the chart below a good while ago in another thread. However, it shows clearly that many of the pre PTS ATC badges had an origin in the RAF Boy Entrant/Apprentice dress regs - DofE etc.

Looking at it again I see they also had the rank of Warrant Officer Boy. My source says that ATC rank chevrons were originally those as used by the RAF Apprentices so I wonder if they also used their WO badge? 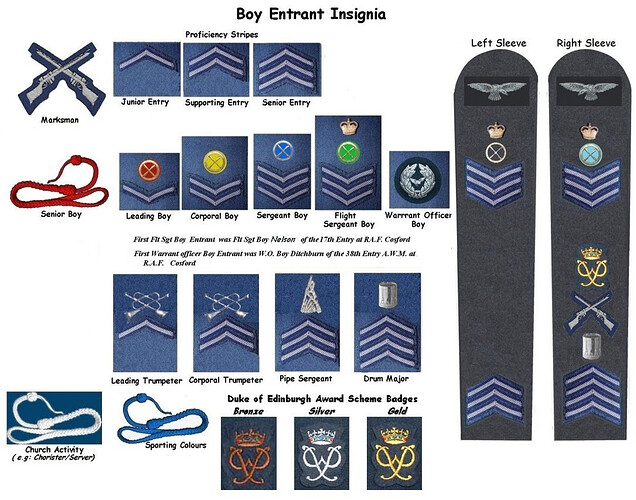 That chart has brought back some memories. Had that chart up alongside the ATC badge chart showing the gliding scholarship wings (the simpler design ones) and instructor cadet rank slides in 2008!

Out of curiosity did the RAF sections of Officer Training Corp/Junior Training Corps/CCFs use the crown or the did they use the same rank insignia of as the ATC.

Reason I ask is that they would have already been using the crown in the army sections and they used the RAF cap badge.

Might be worth digging through some school archives of the period.

If people are interested in broader history doing a search for ATC/Air Training Corps/Air Cadets and Hansard. It throws up some interesting questions and debates about Air Cadets, and ACF and Sea Cadets. One in particular from towards the end of WW2 shows that the issues and concerns haven’t really changed in respect of the volunteers and higher command attitude.