Recently I’ve seen a concerning trend of people directing cadets to use What 3 Words in an emergency during expeditions.

For those of you who are unaware of What 3 Words, it is a relatively new app for providing a location, based on a worldwide grid system. Each 3x3 square in the What 3 Words (W3W) grid is assigned 3 words, and this is the reference for that 3x3 square.

For example, the W3W reference Menswear.Subsets.Nozzle, is an area close to Snowdon summit.

So what’s the issue with using W3W?

The issues are 3 fold;

Firstly, if a cadet was injured and the group provided a W3W reference to staff, this reference is largely useless. A W3W reference can’t be viewed on an OS map, so how would the staff work out a route to the cadets? A W3W reference is show on a simple strip down Google Map interface, which is zero use in working out how to get to a group, and provides no information about their surroundings. For example, Bulbs.Talkative.Alpha is a location close to Glyder Fawr, the map on the W3W app for that location is as per the picture below. This issue is replicated within rescue teams. 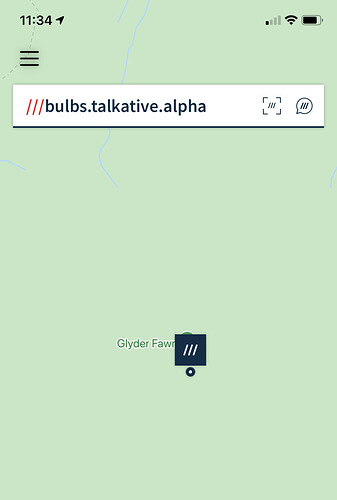 Secondly, there have been multiple instances of W3W providing an incorrect location – by a large amount. This would delay help getting to the location. Here is a few examples of W3W words failing (there are plenty more):

Thirdly, W3W references are very difficult to understand and write down when compared to Grid References. You might well think the opposite, but we train out cadets in how to pronounce numbers over poor quality signal, but saying a bizzare W3W reference via poor signal would be difficult, particularly if the words are odd, for example; Amps.Umbrella.Spoiled (Glyder Fawr Summit, North Wales) could easily be mistaken for Lamps.Umbrella.Spoiled (Blyth, Nottinghamshire) or Amps.Umbrella.Soiled (Nuffield, Oxfordshire). It is a confusing and difficult to understand system, with plenty of room for error.

Ultimately there has NEVER been a problem with grid references, so why are alternatives being sought?

Anyone else think there is literally no point to it?

23 posts were merged into an existing topic: Emergency location - What3Words

2 posts were merged into an existing topic: Emergency location - What3Words