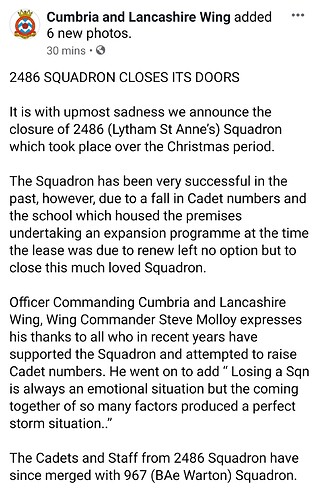 I’m sure there would have been a whole load of history behind the unit too but in the current climate it seems units closing is a regular occurence.

Fingers crossed the staff and cadets move on to another unit not too far away and still get what they want from the organisation.

I honestly think this is the way we are going now.
Merging struggling sqns into others to ease pressure on staffing and funding.

I am divided in opinion. On one hand, I think loss of identity, history and tradition is a huge shame. However, if cadets on X sqn are not getting an experience as good as cadets on Y squadron, and a merger will fix it, then fine. Ultimately the cadets are the reason we volunteer and sometimes that may mean swallowing pride.

I honestly think this is the way we are going now.
Merging struggling sqns into others to ease pressure on staffing and funding.

It’s a huge shame when any Squadron closes, but realistically there aren’t enough volunteers to run units. That’s especially true when more and more specialist roles get created at Wing level and above.

My concern is always that access for young people to the ATC becomes more and more concentrated. Will that concentration be into more affluent ‘middle class’ areas? I don’t know in the case of this Squadron, but seems to be happening locally here.

Look at the Liverpool map and the ATC has retreated from the inner city.

In some places we have too many. From where I’m sat right now I could, in 30 minutes travel time one way, hit at least 4 units. Within 30 minutes in the other way another 3.

Do you think we can hear from some of the Squadron Association aka parents. After all such a situation did not just happen without notice.

It is sad, but is this part of the 2020 strategy. If this was a successful squadron why has the powers not found a way around the loss of yet another unit.

There is an OC Wing who trumpeted his previous achievement of bringing his then unit back from the brink (some while ago), and making it a success story only for him to move on and within 18 months that successful (school based unit) closing.

Something peculiar about claiming success on your CV, when the Command obviously don’t give a fig.

And it also seems a strange conflict that Trustees are supposed to act in the best interests of the beneficiaries, when the Command are not bothered with preserving identity and appear to think that relocation is consistent with maintaining esprit de corps.

How many Wings have actually lost a squadron in the past, say, five years??

Our wing I know we’ve lost 2 and there’s a possibility of 3 more that could easily be soaked up into another active Sqn. I mentioned this earlier with our staff and they would be more than happy to be merged with another Sqn. Sad loss of history etc but the 3 Sqns within 20-30mins of us all have much better facilities and 2 of those Sqns have low cadet numbers on their books.

When I saw the squadron number ‘2486’ I did think that it probably will be one of the highest-numbering (ie recently-formed) squadrons to have closed in the current era.

In some ways that’s inarguably-true, in that there are only approximately 36 active ATC squadrons that are ‘younger’ than 2486 Sqn, across the entire corps (ie higher-numbered).

I would presume that under most circumstances (where there are mergers) the oldest/ longest-established squadron number is the one that is retained? And that if one of these was a 'F’ounder squadron, there’d be no contest- surely?

Other than 35 (Wetherby) are there any other squadrons with a number lower than 50 but no F?

In some ways that’s inarguably-true, in that there are only approximately 36 active ATC squadrons that are ‘younger’ than 2486 Sqn, across the entire corps (ie higher-numbered).

Other than 35 (Wetherby) are there any other squadrons with a number lower than 50 but no F?

I would presume that under most circumstances (where there are mergers) the oldest/ longest-established squadron number is the one that is retained? And that if one of these was a 'F’ounder squadron, there’d be no contest- surely?

you’d think right but there is a case in Liverpool, 7F (City of Liverpool) which was being considered a merge with 90 (Speke) Sqn.
From what I recall from a CFAV friend in the Wing, 7F was on its knees and losing its accommodation, with the expectation it would simply merge with 90 Sqn, and end the 7F Squadron.
They are certainly linked looking at the Google results, but unconfirmed if they finally merged or simply operate out of the same building…

I meant in the sense of when they were originally-raised.

Clearly there are instances of ‘new’ squadrons in areas that originally had old/original squadrons, which have in the past been closed, then the number has been subsequently-reactivated when a ‘new’ squadron has been raised. This situation describes my own squadron exactly.

I understood that locations which had NEVER possessed an ATC squadron before did indeed get a new (high) number, if a brand-new squadron was raised.

Two examples of squadrons that I know of (personally, in S&NI) which have notably-high numbers, are 2496 Cumbernauld and 2535 Livingston (significantly, this appears to be the highest-numbered squadron in the whole ATC). Both these locations were/are “New Towns” (effectively, post-WW2 villages-into-industrial-cities).

Or tell me what I’m missing here in my understanding?

I am interested, not just because it’s general information about the Corps’ history & future that we should all be aware of, but because our own DF-into-Sqn experience very-nearly resulted in us getting issued with a new (for area) reissued number, or a brand-new next-number-off-the-top-of-the-pile.

It took a lot of effort from me to convince the CoC that we really should be resurrecting the original number (from when the squadron went into suspend in c1954) as a mark of respect to the Corps in general and to those original Cadets still alive today. We may now only have, locally, one 1941-era Cadet left, and just one 1950s ex-Cadet as well.

I understood that locations which had NEVER possessed an ATC squadron before did indeed get a new (high) number, if a brand-new squadron was raised

again not necessarily.
in a former wing two Squadrons were based on their formation.
one the year of opening, ie 1234 the other the month-year, ie 120 (Jan-2020)

Fair enough- I am only talking from personal experience, when I raised our squadron from a DF, and we were emphatically-told (initially) that since the official understanding was that there was no previous squadron in the town (incorrect) we would simply be issued with a new next-highest number from those already-issued across the Corps.

There was never a suggestion that we could reuse a number from a location OTHER than that associated with the town within which the squadron was raised (nor would we have wanted such a thing: unless there had been some kind of historical link, why would anyone want to do that?)

And I cannot say I was aware of any options for what might be called vanity/non-sequence numbers (as in “ooh, that sounds like a cool number, let’s pick that”).

I’m tempted to say that perhaps things are always done very-much according to the rules in S&NI; and, that there is a great deal of variety in general regarding interpretation of rules & regulations across the rest of RAFAC. I am in the personal position of knowing that both these statements are correct.