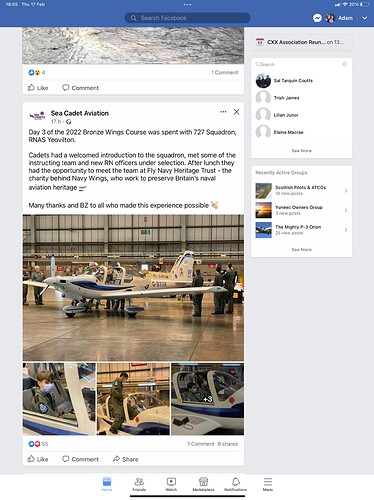 Anyone aware of this ? Looks like the SCC offer better courses than what we do?

Of course they do.

Someone remind me exactly what our USP these days…

It better not be ‘the moon our closest neighbour’…

I’m the first to complain about lack of aviation…. However…

AEF back to flying now, there’s no reason that every squadron in your wing isn’t offered at least one allocation of powered AEF before the summer…

And ACPS is underway, with around 30 cadets per region offered spaces.

But the provision is coming through, albeit slowly.

Blimey Charlie, cadets in a hangar - you wouldn’t see the local AEF allowing that, the kids have gotta stay in the portakabin !

around 30 cadets per region offered spaces.

ererrrrrr here in LaSER we only interviewed 12 cadets . . . I’m going to assume not all 12 got places.

Have a word with your RAvnO. That’s doesn’t sound right to me!

I was copied in on the email inviting cadets to interview, since one of them is mine (who was successful

In our region we have just short of 30 places, which lots of cadets applied for, and as it’s residential it shouldn’t matter where the cadets come from…

I was copied in on the email inviting cadets to interview, since one of them is mine (who was successful

I think all the L&SER interviews took place, I know our Wing sent 8 to the interview and 6 came away with a spot on ACPS, so I assume there were multiple emails with interview slots.

But not to drift too far away from the thread, it looks like an interesting course, especially if this is the ‘bronze’ level, does anyone know the content of the Silver or Gold? @Batfink can you shed any light… I vaguely remember you saying Mini Batfink was in the SCC?

Time for all cadet forces to move to Westminster so that we can share resources and staff. Cadets (and staff) should have an opportunity to take part in other cadet forces’ training. e.g. SCC cadets might want to try road marching with the RAFAC, while RAFAC cadets might want to give flying a go with the SCC (joke). Obvious benefit to all ground troops across all branches of the cadet forces. Might hurt the self-esteem of HQAC, region and some wing staff though.

Yeap - micro Batfink is involved in SCC - but only the Junior Section at the moment. However, I know that the senior sections do run a whole series of these different programmes on a national level covering a whole range of different things - engineering, communication systems, meteorology, aviation, paddlesport, sailing etc

From what I gather (and it’s only gather through quizzing the staff!), the aviation element does have three streams - Bronze, Silver and Gold level.

Time for all cadet forces to move to Westminster

Current 4 of the 5 military cadet organisations use Westminster with CCF(RAF) caught in a halfway house. Path of least resistance is for RAFAC to move to Westminster but it would probably need a minister* to force the issue.

The most likly route is harmonisation when Westminster & Bader are due to be replaced so circa 25years after launch.

Any famous person who was in both army & RAF & Navy?

[EDIT] minister as in politician rather than an act of god.

minister as in politician rather than an act of god.

No no, the first assumption was probably accurate. It would take at least an act of god for any kind of change to happen at HQAC.

Not sure where you got this but according to the twitter of the LaSER RAvnO there were 50 interviewed and 27 selected. Maybe you were only copied in on your wing’s interview allocations?

or one day of interviews. 🤷