Ladies and gents I wonder if anyone may be able to answer me a question. As you know, we work closely with our green (ACF) CFAV and Blue (RM/SCC) CFAV counterparts

Given that we are trI service as such and ultimately responsible to the MOD would a CFAV in say RAFAC expected to give/reciprocate compliments and show respect to either a higher or sub ordinate rank in another cadet force.

Yes is the simple answer.

Long answer is all the permutations required.

Junior officers (OF 1 and 2) in any cadet force to salute senior Officers (OF 3 and above.).

To be really complex…

An Officer cadet in RAFAC IS Commisioned and so is to be saluted.

Naval Midshipmen are junior to all other Officers and so technically below a RAFAC Officer Cadet, who is already Commisioned as Pilot Officer, yet wears the Officer Cadet tab as an identifier only.

All bum about face.

Our local ACF SSIs salute me and I return it as crisply as I can. In turn, I salute their snr officers. 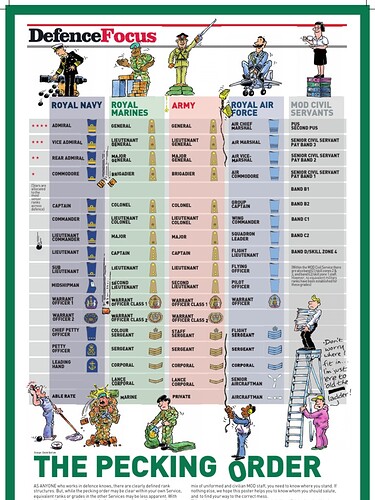 I know of a WO RAFAC who is an OC of a squadron that is having issues with a sergeant who is the detachment commander in the joint cadet centre Acf.

WOs don’t get saluted though

Whilst WO outranks Sgt.
Thats more of an issue of RAFAC and ACF.

They should, a lot don’t… my local ACF SNCO’s never salute me and call me “Bud” and the other Sunday their LT didn’t bother saluting me even thought I’m a Sqn Ldr - so I printed the pecking order posters and pinned them up round the Sqn

No, but the Sgt should still stand to attention when spoken to…
If you really wantd to shine them on…

Not saying its what i would do…

Why not just speak to them?
Printing posters and leaving them lying around, just seems a little petty.
If youre a Sqn Ldr, might i suggest, acting the rank and if youre not happy with them not saluting, talk to them?

Junior officers (OF 1 and 2) in any cadet force to salute senior Officers (OF 3 and above.).

Do the army/navy OF 1’s and 2’s salute each other? Obviously we don’t (except on parades etc) but does that apply to them as well?

Can only speak for Army but no OF1/2 don’t but they also have an OF3.

But it’s more honoured in the breach when the cadets aren’t around, at least on our site.

Due to our location we are regularly at a Army site. The regular squaddies seem pretty well versed in the RAF/RAFAC ranks and pay compliments accordingly.

To summarise yes compliment’s should be paid but mutual respect is more important.

Unit commanders are the same “status” regardless of rank due to how the different organisations work.

Unless on a formal tri service event no one has command over each other. In doesn’t help that the RAFC has a lot more officers so cadets in the other services don’t really understand the officer not let alone equivalence.

The RAFAC rank of L/Cpl (

)is often not recognised by the ATC part of the organisation, sometimes being treated like a snr cdt rather than an NCO.

The SCC have their ranks top out at cadet PO (crossed anchors & crown) So whilst the rank of PO is equivalent to Sgt, in terms of knowledge, experience & the process to get promoted to that rank it is effectively similar to a RAFAC cdt FS or CWO.

Able cadet (three red stars) is effectively the SCC version of a cpl despite not showing up on any Rank charts.

ACF also have the cdt CSM rank while the CCf(RN) have/use to have Coxswain as the equivalent of an ATC cdt FS.

show respect to either a higher or sub ordinate rank in another cadet force.

I would expect this of everyone regardless of rank or status - we all volunteer to make things better for young people. Our methodologies differ but the aim is the same (yes even the scouts!

So in short recognise where we are in each other’s organisation but don’t try to take over or command as you will look a bit walty & people won’t want to work with you.

Then they are both Same status & should give reciprocal respect as being equal.

Then they are both Same status & should give reciprocal respect as being equal.

Exactly, in the same way that I would and always have treated NCO’s who Command Squadrons the same as I would treat an officer doing the same role.

No junior officers in any of the forces do

So we saluting Civil Servants now?