So when did the new fangled 80th birthday logo get promulgated

And to it a glider on it

Started to appear on social media in last couple of days.

dont know but link to downloads…

At least they didn’t use a Vigilant for full Irony Mode.

Pretty much par for the course really…
Well in advance of the RAF 100th anniversary the media team had released brand guidance on how, when, and where to use the RAF 100 logo.

No such clarity for us, as usual. Just sneak it out and don’t tell anyone.

It was promulgated by HQAC on Friday. 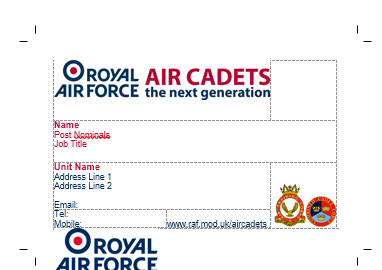 It was promulgated by HQAC on Friday.

It didn’t make it this far…

Is this something that should even exist?

Why when most people try and forget birthdays and anniversaries are we seemingly so intent on doing them? Unless surviving as an organisation for another 5 years is really an achievement. Do the ACF and SCC do anything similar?

The CAC has said we shouldn’t be bothering. This will be a monumental waste of money we as an organisation can ill afford.

The next anniversary we should mark is the centenary.

Not in my inbox (or junk) either

If it’s anywhere, it’ll be there!

No such clarity for us, as usual. Just sneak it out and don’t tell anyone.

It was released late 08/01, It went back to RAF graphics as there had been an issue with it apparently. There is a logo guidance form attached to it as well.

If you’ve not yet got it, speak to your Wing MCO, we released ours yesterday via our website and via SharePoint.

The CAC has said we shouldn’t be bothering.

Not so, you’re embellishing what was said.

CAC indicated it would be a far quieter affair and not something that the organisation will be concentrating on as a primary importance.

Not that we should ignore it all together

Why when most people try and forget birthdays and anniversaries are we seemingly so intent on doing them?

If you’ve not yet got it,

I’ve got it now thanks. From the Branding Portal on the RAF website thanks to WelshML… Although the “guidance” is somewhat lacking in content. “Clear space”, “there are different coloured versions” and “don’t alter it” are the only points.
Unlike the RAF 100 guidance which included actually useful information such as “This is where it should be placed on various different formats”, “This is how big it should be on different formats”, “This is where & when you should/should not use it…”

Where do I find this template?

dont know but link to downloads…

He’s mistaking people forgetting his with people doing it generally…

I’ve already said I do not want any fuss on my 60th, the kids groaned as that’s what mum said when hers was looming.

The problem in our organisation is what do you do other than parade, which has all the appeal of sticking pins in your eyes and some meals. The things for the 75th weren’t awe inspiring, a member of staff and some cadets went to the torch thing and came back thoroughly disappointed.
It’s the same then every 5 years you do a parade and meal, which really get a sense of deja vu and as we do parades every year in the multiple and lots of meals, they are not really special enough to get the juices flowing. If HQAC said that there will be no Air Cadet specific parades except on our formal anniversaries, then they become something a bit more special and because you will only have a smattering of cadets who vaguely remember the last one, cadets will potentially be more up for it.

When our factory marked it’s 25th (although the company had been going much, much longer) we had an all expenses paid bash at a local entertainment spot, all we had to do was turn up, eat, drink and enjoy. Now if we had something like that in the ATC bring it on.

Strictly speaking we should have had our 75th in 2013 and 80th in 2018, to mark the formation of the ADCC after all that was the first Air Cadet movement.

Hire out drayton manor or something for the day.

Rekon that could cope with 40000 people.