RAF Beret Cap Badges.. along with something else

Right… I saw some inspection press pictures of what I first thought to be some very well put-together Marine cadets, and then I saw the RAF cap badges… I’m baffled. Can anyone explain this combination at all? Cadet units aside from ours are valid to go off a serving Regular Unit, am I missing something? Happy to be informed.

I’m not looking to accuse or shame - purely putting this here if anyone had any insights to my questions!

This has baffled me…

It’s probably something like that was and has been the whole unit’s chosen parade uniform for ever, like pre- 1940s (it’s a relatively old style) and then the cadets wear the badge of their section.

Which, in various forms, has been around for a looping time.

This looks totally wrong - CCF sections should wear the uniform appropriate to their parent service.

I would be intrigued to learn where this ensemble is defined !

However I’ve come to accept the CCF are a law to themselves and until someone in their upper echelons decides that all schools and units must adhere to dress regs and then enforce it that it will never change.

The problem is that the chain of command is very murky and ultimately the Headmaster is in charge of the unit. Parent services have a degree of control but not to the same extent as in the ATC/ACF/SCC

The thing is that their respective tri-service sections are all wearing the correct uniform (I found another view where the RAF section is seen in RAF No. 2s)

It makes me habit a guess that they kit up their flagship ceremonial drill squad in Army/Marine No.1s. But all the cadets were apparently from the RAF section…

Thinking about it that sounds the most likely.

If that was from the same event then it seems unusual that the ‘Reviewing Officer’ is listed as ‘ Rear Admiral Will Warrender‘, when the original post clearly has a picture of the CAS, Air Chief Marshal Sir Stephen Hillier reviewing the cadets

Squadgy since I did some further delving on the twitter, if you look at the timestamp the first link was from 2018 with Air Chief Marshal Sir Stephen Hillier inspecting, Rear Admiral Will Warrender was this March 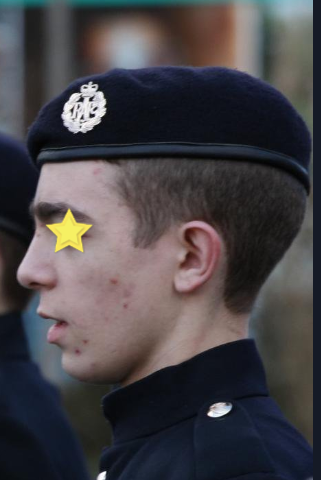 This may be a CCF school-specific uniform, like the Welbeck DSFC badge worn on RAF berets, or QVS wearing their redcoats & kilts as a special order of collective dress, then normal Single Service RN/Army/RAF No2 dress within their contingent sections. I think that’s being hinted at for Tonbridge…? Perhaps they are directly-sponsored by the RAF, for some historical or contemporary reason.

Also…as part of Air Force heritage: during WW2, members of the WAAF wore black/navy-blue berets (normally in fatigues). I have seen pictures of this.

RAF blue-grey berets appear to have started off with the Regiment in 1947, replacing (for them) forage caps, then becoming standard across the RAF in time for the RAFNS era. 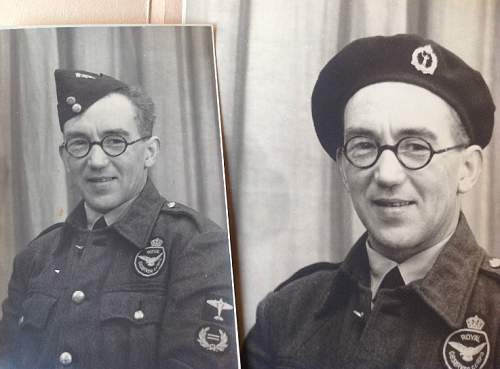 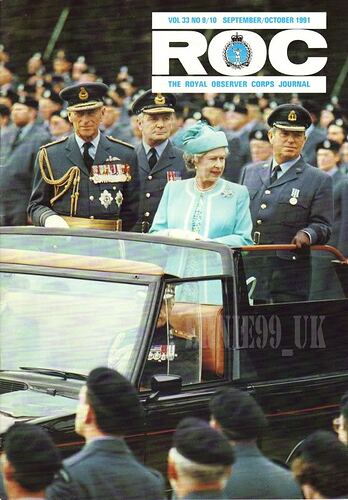 And to really add to the beret rainbow…does anyone have that edition of the RAF News with the picture of two RAF officers wearing green RM berets, after completing the extended ‘All Arms Plus’ crse?

My guess is that it’s nothing as well-thought-out or based on tradition, but rather a desire to allow RAF section cadets to take place in a guard of honour without ‘spoiling’ the uniform look.

Personally, I like the random nature of a G of H with three different uniforms…

Whilst on camp a few years ago, I met an RAF Officer who wore a SAS beret, along with the old style tropical pattern DPM. He was a lovely chap, who after chatting over a beer in the officers mess, then offered to come and speak to the cadets the next evening. He had some cracking stories to tell, and the cadets were in awe of him!

No jump training or P Coy…the CO didn’t want a Rainbow of Berets On Parade.

That’s quite common apparently for attached troops. It seems to be only the Royal Marines to whom the beret itself is the mark of passing out. For others it’s about the cap badge; and obviously, for Paras, P Coy is about earning the wings.

That’s because that’s what the maroon beret was always for. If you’re attached to the Airborne division you wore the beret, regardless of your arm of service. It’s nothing to do with the CO.