If I went solo with a junior BGA club would I be able to wear the glider wings or would I have to complete a glider scholarship in cadets?

You / a Sqn staff member apply to 2FTS CAPE admin with evidence of solo and are awarded the civilian qualification wings.

The goalposts keep moving on this one. I’ve just tried to download ACTO32 and BADER isn’t playing ball (is it just me?), but the last time I did this (approx 1 year ago) I was told wings would only be awarded for completion of some sort of scholarship leading to solo flight, not just privately funded. At the time I was able to get the wings awarded via the local VGS which has now been disbanded.

Tingger what do you mean ‘civilian qualification wings’ - are these a new badge or did you mean the GS wings?

ACTO34 states the situation with ACPS wings is they will be awarded for another scholarship scheme leading to solo OR for a complete PPL/NPPL/LAPL. Again the goalposts keep moving on this. CCF BRO Nov 2016 makes interesting reading if you have BADER access.

They are introducing a new set of wings to cover all the requests for awards from external sources. Has a nice “C” in the middle.

They probably haven’t been manufactured yet though.

We had a cadet who soled at a civvy club and he was awarded the old Silver Solo Wings by the RGLO on production of his log book. ACTO 032 doesn’t appear to have been updated to incorporate the new ATP but…

When I was in the ATC a few years back my Gliding Club CFI wrote a covering letter along with my logbook having done 30 or so solo launches and a few hours but the Surrey Wing WGLO at the time was having none of it and I never saw any wings.
Surprising really as the BGA Solo Endorsement arguably involves more training and provides a far better prepared pilot. But CGS has never seemed to see the BGA eye to eye, hence the issues getting cadets flying at other clubs with ACTO 35.

jssaltash my advice to you is to stay in Civillian Gliding, don’t jump across to a VGS, especially in the aftermath of what’s just happened, you’ll have far more fun soaring around the country in a single seater in the years to come than you’ll ever have doing circuits in a Viking.

A CPL is quite a stringent training program too, doesn’t mean you can write in and get RAF pilot wings though.

It has nothing to do with CGS.

No. But as I wrote in an unanswered letter to OC 2FTS last year (? year before), what are the wings for - achieving a flying standard, or being good at scholarship applications?

2FTS or CGS. A 16 year old Air Cadet going solo vs a 16 year old in Air Cadets going solo at a Civillian club is directly comparable. Yet Wg Cdr 2FTS has to ‘Assess each case on it’s merits.’ if it’s done anywhere else but within the military.

Seeing as 2FTS are increasingly having to rely on BGA Clubs it’s time to put aside the silly bureaucracy and get cadets flying and get them their solo wings.

In the latest turn of events it seems that just turning up for a weekend, flying a flight simulator a few times and doing a trial flight gets you ‘Blue Wings’ now. What happened to proper goals that people had to work hard to achieve?

As the age for going solo in civilian clubs is now 14 would a cadet of this age be considered for Glider Pilot wings?

(There was a item in the local TV news some time ago about a lad who went solo on his 14th birthday, having done his training over many years previously so he had more experience than virtually all solo cadets would get being tought to fly one solo circuit. (His dad happened to be the Chief Flying Instructor at the club!))

May I informally ask, please; what the updated collective informed opinion on this:

(And if they are, what wings / brevet is worn?)

Thanks! I think that route had been followed previously (as far as I remember, to no constructive outcome in early process: however, I might be wrong on that, and/or perhaps it needs to be tried again).

In fact, if such a document doesn’t exist, it probably should include all current and legacy RAF flying brevets as well.

A sudden thought…now that the RAF has got rid of all flying brevets apart from full wings and half-wings (ie the two pilot types and these generic WESO/Op brevets) thus relegating all these previous legacy specialist half-wings to the history books (I mean the versions such as N, LM, AT, AE etc) and also dispensed with those short-lived RPAS brevets…there must surely be vastly-more different varieties of flying & gliding brevets in RAFAC than there is in the RAF?

I think that route had been followed previously

You can get your C-Wings after flying solo in a Powered Aircraft also.

the Cadet in question here - https://www.youtube.com/watch?v=8J4J-vgF7nc

and receiving his Wings 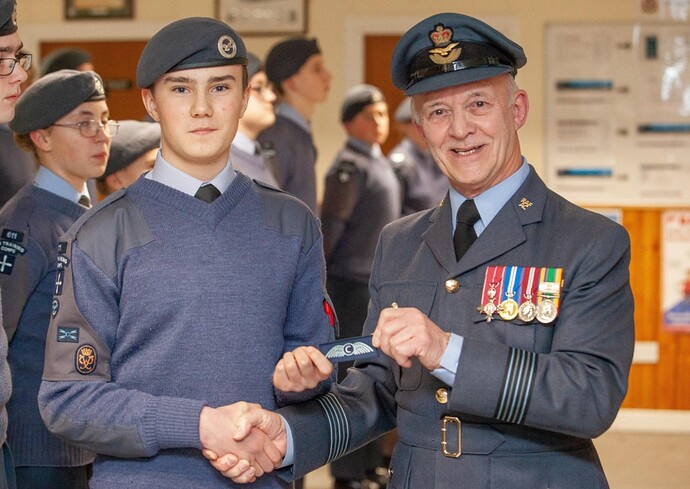 (ok so this is solo powered aircraft rather than solo glider as per your example, but shows it can and is being done)

A scenario for you…

If a cadet goes and completes a Civilian gliding course. And gains their C Wings…

Then goes and completes their Flying Scholarship through a Civilian organisation… do they wear Two sets of C Wings, or just the one?

Just the one I believe

personally i would hope one

wearing two of the same badge it pointless - and yes i get that by implication it would show that both courses have been completed, but the badges recognises an effort made outside the organisation, i don’t see the need to multiple that

Apply through your WAvnO or RAvnO. It should be working; it definitely is for most regions.

About two years ago I got fed up of waiting for a set of Civvie Wings so emailed a bunch of folks at the top of 2FTS… The replies were all lovely, and I got a set of civvie wings in the post for my cadet after emailing a scan of the logbook.

About 10 days later a blanket email about using the CoC came down, it was like a region wide telling off especially for me!

But I was just a well meaning CI at the time!

On a different note, I notice that the adult staff attached to a VGS get to wear wings on their blues (only ever seen one instructor in blue, and he had proper queens wings on his uniform so assume this is the case and he wasn’t just being a rebel)… What about uniform staff that hold civvie wings, either PPL through to commercial!?