Coronavirus: what happens next!

So with the ongoing spread of coronavirus, and the return to school of many kids (and staff) from ski’ing trips to Italy, I wonder what will happen, or RAFAC direction, if the virus becomes more widespread across the UK.

Schools are getting direction in an attempt to control the spread, but what about the coming together of cadets from various backgrounds on parade nights, or Wing activities. Could we see the cancellation of camps!

We’ve had an announcement of a local school shutting down for deep cleaning after reports of a student returned from Italy and feeling unwell.

We have cadets from this school at three squadrons locally.

Advice from our sector basically consists of introducing hand gel (if you can find it) and monitoring.
The thought process was quite simple. 65.5 million people in the UK. Only 15 confirmed cases out of 7690 tested. On those figures, there is no need to panic and fall for the hysteria in the press.

Those at greatest risk are over 65’s and people with existing health conditions, just as with flu. Just behave rationally and take action as and when needed. 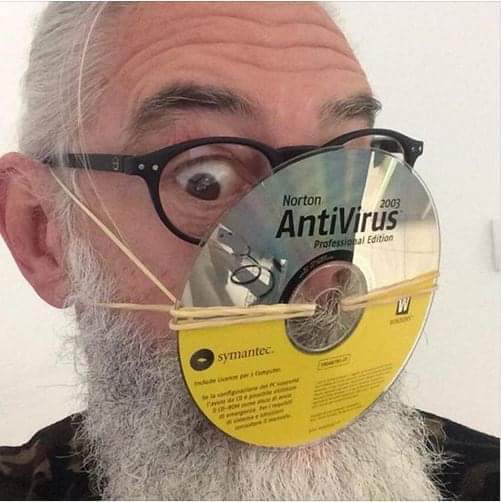 There are huge differences in health care / medical options / knowledge base compared to the flu pandemic of 1918.

At the time, little or nothing was known about viruses; there are now numerous anti-viral drugs & it looks like clinical trials of remdesivir will start next month as a potential Covid-19 treatment.

Also, public awareness is much higher (perhaps a bad thing in a way?) & there are no political pressures (or are there?) to take a particular course of action - for WW1, in the UK, the national health advisor did not issue crucial guidelines as he considered that the war effort would have been hampered!

One of the USA military training camps (Devens), hit by the second wave of the infuenza in 1918, still sent troops across to Europe, despite the guidance from the camp medical officer to the contrary.

Even President Wilson agreed to continue to send troops.

However, today, contagious diseases can be spread world-wide in less than 18 hrs, so compared to 8 days to cross the Atlantic by ship in WW1, we certainly cannot be complacent.

For most of population, covid-19 is not a huge medical problem. It may well be an issue for the elderly or those with underlying medical conditions, and also maybe very young children. The biggest issue comes from the effects on businesses and the economy from being being stuck at home off sick/in isolation.

So far, less than 0.00003% of the UK population has been confirmed infected. We are not at shutdown stage yet.

I don’t get the hysteria and loss of perspective around this, IMO spawned by banal 24 hour news needing to fill the wee hours.

You can see the lame and lazy taking the mick and creating havoc.

We’re expecting a couple at work (the sort that take days off for a cold) to call in and surprised they haven’t. Mind you if they do and we get told to stay off it’d be a chance to get some things done around the house and garden. Fingers crossed.

China were slow to act and incredibly densely populated - hence the rapid spread and large volume of cases.

Governments and the WHO are still very much on high alert - but it’s their job to be!

Global cases are on the decrease - it appears even China has managed to reach a peak and begin recovery. 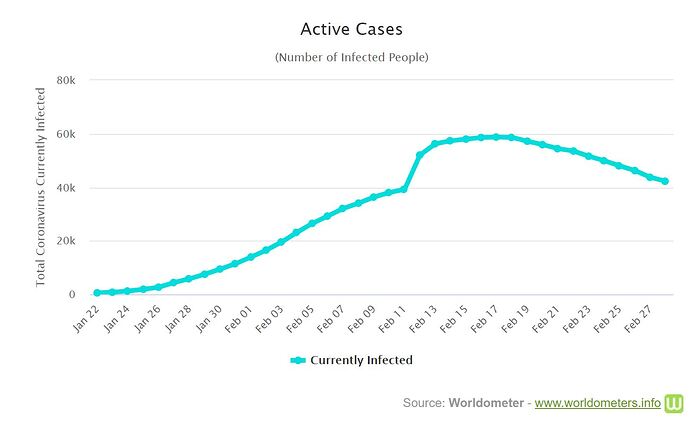 And for comparison, cases in Europe generally are comparatively low, UK very low. Italy has the potential to become the “European groudn zero”, but generally I’d say we (the UK) have been very prepared and cautious, having had the opportunity to watch what was going on and prepare and respond accordingly.

The fact that someone has a sniffle and we’ve closed a school (I think there’s a few) shows how seriously we are taking containment. 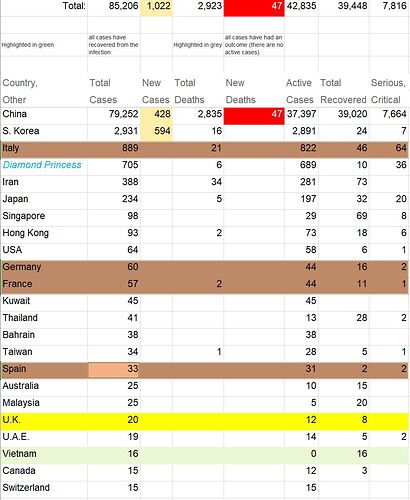 Cases outside of China are still growing and will probably carry on for a bit, but are still only at very low levels. The slight delay in massive spread from China and wider Asia has given most of the world enough time and information to react accordingly.

No idea what happened in Italy.

We know where it is, we know how to react to people coming from those areas, we have advanced health services… we shouldn’t have a problem containing it in the UK.

(the sort that take days off for a cold)

We get disciplined for sickness and they wonder why everyone at work is ill.

We do if there is a pattern which casts doubt. Such as the guy who was always ill when Man Utd had a big game. Turned out he was phoning in so he could go to the game.

There have been incidents of officers injured in duty being disciplined for sickness. There is no incentive to only take 1 day sick, if you go off you might as well take the full week.

2 years ago a family member of mine had
8 weeks off for surgery and recovery, went back to work and didn’t feel quite ok after a few days… went to the doctors that afternoon to get a once over instead rushed to hospital and was in surgery that night postop infection which needed another 10weeks off work, 3 of which was in hospital and 2 operations.

Went back to work and was asked to go to HR for a chat… the chat was a disciplinary for absenteeism. even though they knew months in advance about the original surgery.

I get 10 paid sick days a year, used the first one last month and had to do a return to work.

My lack of previous sickness in the 12 months prior made my manager so happy as the process was easy.

Apparently some need a additional page in the form.

I just had an entire month off with stress. Wanted to go back earlier and they insisted I use the full time in the doctors note. Then without asking implemented a phased return for a fortnight so I was doing shorter days to miss the rush hour trains. But during that period I was more productive than I had been in the 6 months before of long days and no time off. Guess I got lucky with my employer

Went back to work and was asked to go to HR for a chat… the chat was a disciplinary for absenteeism.