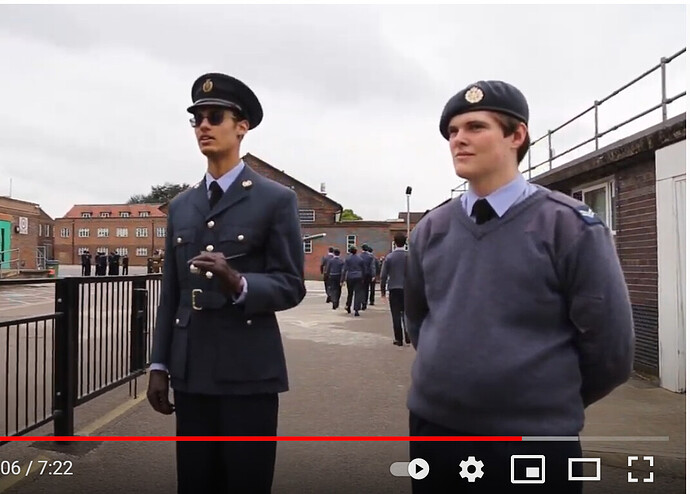 Yeah. I saw that video. I was not a happy bunny. It was like a stereotype checklist.

It’s the taking part that counts…

In all seriousness maybe hide the faces

Do you have a link…?

It’s Merchant Taylor’s school. I’m guessing they’ve given an RAF section cadet a JUO rank and that’s what he’s wearing on the lapels?

I always think drill just needs to slow down.

Apart from the deliberately slow bits.

Our cadets always race around the parade square, it’s like the Adrenalin of a competition takes over.

Not sure what comment is expected on this video… but they turned up, they’re well turned out, and they gave it a damned good go.

Kudos to them all.

Why I train my competition squad marginally slow.

They were fast (for our standards, but…), think I saw some army drill in there as well.

I agree that we can’t criticise cadets for following what they’re told. Uniform wise I think the team looked half decent (when I realised YT had defaulted to 360p and I changed it) and I’ve seen far worse standards at ATC events.

Drill needed some polish and slowing down, but we don’t know how long they’ve been in and how much time they actually spend practicing.

I was actually impressed with the continuity-esque wheel section, and the commands were well timed for about turn and halt. They kept reasonably tight in their twos and didn’t get too much out of shape with the crossing points. I can forgive the minor details on the rest of it in favour of a bravo for pulling that off to the standard they did.

Did I spot an LAC in that Squad?

Why does it look oh so creepy, master and apprentice style.

I’m guessing the shades are prescription

Please remember that we are not here to publicly belittle or bully people. Don’t step over the line anyone please…

Why has the cadet wo got a stick…

Im not a drill skilly… can someone explain the stick thing.
Serious question.

Is it a band thing or something special to CCF.

Barking up the wrong rabbit hole. That’s clearly not what he’s using it for.

Do you have anything to add that isn’t hyperbolic or just nitpicking a group of cadets giving their best shot for a competition in a video from 2 years ago?

My issue is with the staff who have issued that uniform. Not at all with the cadets doing as they are told

Not at all with the cadets doing as they are told

Obvs.
It’s not the cadets fault.