ACPS Cancelled: another kick in the teeth

HQAC have just cancelled ACPS for the year, despite Tayside being fully prepped and willing to accept cadets on the pilot scheme again.

Imagine what those cadets selected must be feeling now? First they get an email to say congrats you’ve been selected, then they get a class 2 medical, (at great expense), then the email to say hard luck it’s been binned!

Sounds to me then that Tayside have sensible, practical Covid response measures which enable courses to happen, yet we are shackled to the RAFAC procedures on which I shall reserve judgement…

Is it not a residential course? Simply test the cadets, isolate them for a few days, then with a negative result they can crack on in a bubble of other tested personnel. Tried and tested in the forces right now.

I suspect this will extend until April 21.

Currently it’s only until mid october for the residential ban (or at least that’s when it will be reviewed).

It’s a MOD decision, not a RAFAC one.

Simples really, those cadets given a place are simply deferred until 2021.
If anyone ages out in the mean time, maybe a quiet word to the air league to get them a scholarship that way? Would be a minority who age out.

If you look on their Facebook page, they have been instructing and sending their young civvy students solo since the end of July, so it looks like they have implemented measures so their instructors don’t have to isolate.

Wonder if the MOD are still paying them for all these courses that aren’t happening?

If you look on their Facebook page, they have been instructing and sending their young civvy students solo since the end of July, so it looks like they have implemented measures so their instructors don’t have to isolate.

Yeah that’s cause the Civil Aviation Authority permitted it…

The MOD however has but the breaks on this…

We need to stop getting overly excited by restrictions in this current climate and thinking the ATC is something special.
While I feel the majority of people are not overly fussed as they have seen the risk has been nothing like we were told, our politicians under constant scrutiny and criticised since day 1 via media and social media, (although I feel civil servants should be shouldering and exposed to the criticism) are now acting faster and harder. If the media and social media weren’t so intent on scaremongering and sensationalising things, we’d been doing more things by now.
Could you imagine the fall out if a cadet or someone at Tayside related to air cadet attendance came down with what everyone would regard as CV19 (although I feel by now it’s not what we had in Feb/Mar) would mean someone in the MoD may have a job altering moment.
We now have to wonder about the effect of the current guidance for schools on us.

So to paraphrase your post… This whole thing has been spun out of proportion by media and as as a result we should take covid 19 with a pinch of salt and not put policies and mechanisms in place to prevent them catching it and potentially dieing?

All I’m saying is that with a small group of people it really isn’t hard to test people, keep them in a cabin for a few days then do a thing. This simple process keeps getting dismissed immediately even though it’s easy! It just depends on how important the thing is. And as for just waiting until 2021; covid isn’t going away…

the risk has been nothing like we were told,

The risk is lower because of the precautions put in place. That’s how risk assessments and control measures work - a concept we’re all familiar with.

Billions were spent to prevent Y2K just so people could shrug it off as “nonsense” when nothing happened. The same is true here.

That’s how risk assessments and control measures work - a concept we’re all familiar with.

Well some of us at least

I can’t help but draw a comparison to driving lessons which are now permitted to be carried out. I’ve seen plenty of driving instructors wearing face masks or shields.

Firstly this and related families of viruses mutate, hence the reason we’ve not found a cure for the common cold. So what was doing the rounds earlier in the year could well change, so come the next flu season back to square one.
I am more than aware of the notion of risk and associated precautions and not just from an ATC perspective. However I wonder if a potential risk should be used as a way to spread fear and stop people doing things, even with precautions in place, which is what has happened and still happening with this. Imagine if that happened in the ATC … The precautions were only to “protect the NHS” and those deemed at greater risk. But for the vast majority the risk has been minimal. If not, you wouldn’t have had millions stood in queues 6ft 6in so apart, only to go into shops and this be ignored, as in one instance by a young woman who berated a bloke while frantically tapping her phone as he went over the bit of tape on the floor outside ASDA, but inside she pushed past and leant between people. If this was as bad as initially reported, since the end of May when things started to relax, where was the massive increase in people infected / affected?
The acid test will be over the next month as schools go back. The scare/doom monger brigade in the media will be waiting for the first school to have to take action as someone sneezed, coughed and felt a bit unwell. I’d just feel sorry for the poor sods who’d have to ‘hole up’ for two weeks, waiting to see if something happens.
I see little point in trying to draw comparisons with “civilian” driving lessons/tests and this as the MOD has no interest or control over them. Without rhyme or reason throughout the last couple of months things have been cancelled, postponed and reported to instil indignation about people’s behaviour and spread fear of spikes and second waves, except the historic event protests, where somehow it was OK to have large crowds in the streets, yet people; on a beach, having a party or visiting somewhere isn’t OK. On the driving lesson front one of our neighbour’s eldest son is off to uni and been desperate to get his test done before he goes. After months of no lessons he started again with the hope of getting a test done, which won’t happen as apparently every time they looked at the website when it reopened there were tens of thousands trying, now they’re trying to book for next Easter. 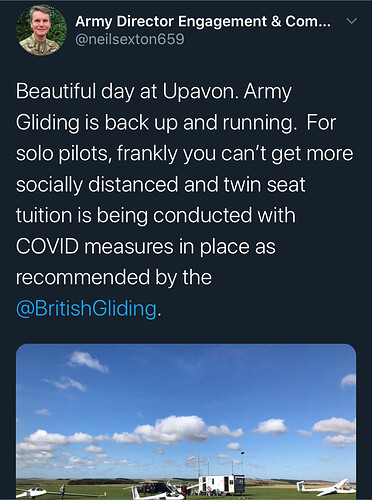 Not L3 residential training, though…

IBN issued today to cover this.

Pretty decent comms to be honest, happy with that.