Hello everyone newbie member here with my First question.

Given that the Commissioned staff receive a Commissioning Scroll from and signed by Her Majesty in line with their counterparts within the Parent Service.

Are their equal plans to issue a Warrant Officers Scroll of appointment to the Warrant officers on appointment with their Tate and Lyles Warrant officer, issued and signed by the Secretary of State for Defence as is also the case in the Parent Services

Wasn’t all Warrant Officers meant to get these on the 1st April?

in reality if that April date was meant no one (0.01%) of those eligible would have been wearing them the past 2 months.

i’ll believe it when i see it. it has been discussed for as long as the SNCOs ranks were added to back in the early 00s - 20 years later it is still being discussed, still some view it shouldn’t happen, some feel it should, but only to the entitled few, others definitely if they wore them in a past life, a handful more want them for bragging rights as they go by the name WO W Mitty, others don’t care, some even care that it will upset the regulars and really don’t want it because of that.

I will be entitled to wear them in Oct but I do feel somewhat uneasy next summer when i go on camp as a 31 year old “WO” rocking Tate and lyles that the propers WOs may have worked 31 years to get theirs.

what is the entitlement?

I thought, because of people like yourself, there would be a grading, and so required 4 years as WO before a T&L WO - or has that gone out now and if a WO = T&L WO?

but as you say - some “young 'uns” recognise what they stand for and feel uneasy about wearing a symbol some took longer to earn than they have been alive!

I’d never heard any suggestion of 4 years service as a WO before T&L.

The policy is dead easy for a change - All WO will be badged with the Royal Arms.
That will bring us into the same line as the other cadet forces.

I never concurred with that flawed logic they would spout - “the RAF don’t have two WO ranks…”
My response was always: So? Who gives a toss? Outside the RAF Regt they don’t have LCpl; Non-technical trades don’t have SAC (Tech) or Chief Tech… There’s plenty of scope and precedent for trade specific ranks.
They could quite easily have created two WO ranks for the RAFAC and nobody would have batted an eyelid…

Though, personally I don’t think there is or was any need for two-tier WO ranks - we just need to stop promoting muppets beyond Sgt.

that the propers WOs may have worked 31 years to get theirs.

Not all RAF WO’s have taken 30+ years to get to that rank. I know one Regiment guy who went from SAC to WO in 13yrs. I’ve always been of the understanding that WO takes on average, 15-20yrs dependant upon trade and of course, the person’s ability (as well as the ability NOT to get adverse comments on his annual reports!). A Supplier I knew in 1996 had just been promoted to Cpl, in 2003 on Op Telic 1 I came across him again as a Sgt and by 2010, he was a WO. 14yrs from SAC to WO in the Supply trade isn’t bad.

My advice to you Alex, is just be yourself, irrespective of the badge you wear on your uniform.

“the RAF don’t have two WO ranks…”

They used to have WO2 and WO1 as late as 1939\40, I believe. Even worse, the Army used to have THREE WO ranks - WO3, WO2 and WO1. WOIII as it was known, was a Platoon Sgt Major. Imagine the RAF having Flt Warrant Officers…

I believe PSMs (that is an exceptionally stupid thing to write, oddly) were actually in charge of the platoons instead of doing normal WO-type things.

Though, personally I don’t think there is or was any need for two-tier WO ranks - we just need to stop promoting muppets beyond Sgt.

this!!!
(although helps if muppets are not appointed to Sgt in the first place!)

To be fair I think it will be harder to be appointed as a WO going forward instead if 4 years as a FS and all the boxes ticked. I think that’s getting reviewed alongside the insignia change

i hope so.
I can live with poor people being Sgts as they won’t reach FS, and the exceptional FS reach WO

Unfortunately that is not the case - being such a tick box exercise anyone who puts the hours (note not effort, but hours) in can attend the right events and work up the ranks.

WOIII as it was known, was a Platoon Sgt Major. Imagine the RAF having Flt Warrant Officers…

Madness… IT would be almost akin to having a Squadron Warrant Officer in the RAFAC to look after a unit of 30-40 personnel.

I’ve long held that promotion to WO should be far more limited than it is currently and one of the thoughts was that - like our colleagues in the other CF - it could be limited to specific posts.
In my plan a Sqn of 30 cadets wouldn’t get a WO post - they’d be scaled for a FS Discip.

I see it all too often! But I can also bring to mind a few waste of space FS as well.

At the risk of sounding like a stuck record I’m going to again relate our system of pointless box ticking to that of the SCC - who really have a better setup.

For them to even be appointed to substantive PO/Sgt (SCC/RMC) they have to achieve more than our Sgts do: 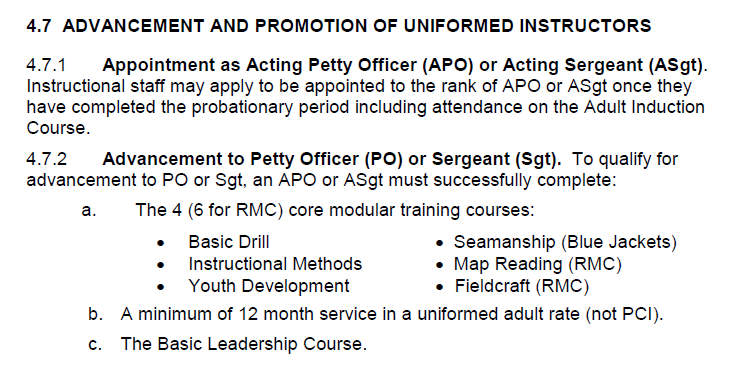 Then for promotion beyond that they actually have to achieve something additional:

So by the time they reach CPO/CSgt they will have been in uniform for at least 6 years (12 months in Acting rank and a further 5 as substantive); they will have specialised and be an active instructor in their field; and they will have passed a qualifying course.
The majority of instructors will not get beyond CPO/CSgt (FS), since promotion to WO is for specific roles only: 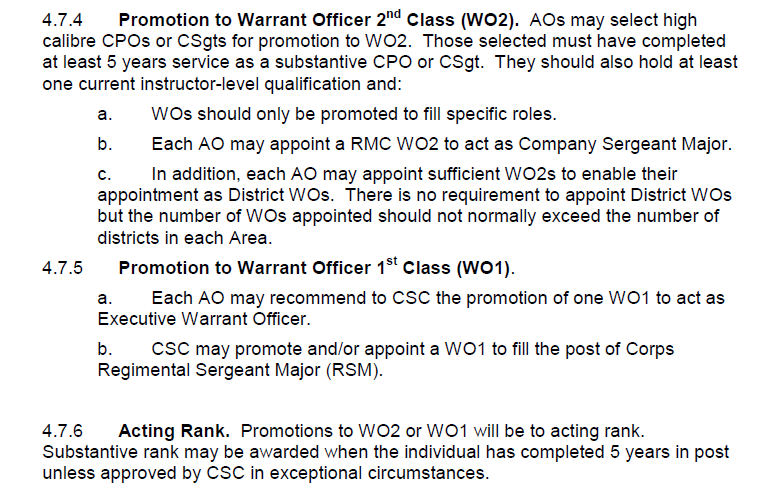 Tougher requirements for appointment in the first place. More emphasis on training and development. Longer time in rank… These add up to better Senior Rates/SNCOs.

What do we do?
Run through a poor checklist (it’s not a matrix, despite what they might call it).

“Attended AEF” - What relevance does this have? If someone is a cracking candidate for FS who cares whether they’ve sat in the crew room supervising the cadets for 8 hours?

“Attended a blues camp” - Were they any good? No they were and actually made the week harder than it should have been… But they “attended” so they get a tick in the box…

“Attended a greens camp” - Who gives a toss? If they are a DI, for example, and would make a great Sector WO why should it matter if “greens” is not their sphere?

We put all the emphasis on arbitrary criteria which don’t really matter and then we don’t put enough emphasis on the question “does this person stand out above their peers?”
Promotion shouldn’t be a “well done” for being mediocre in rank for 4 years - but it routinely seems to be!

The rod they’ve made for their backs now though is in having not set high enough standards from the beginning.
Now we’ve got a plethora of WOs, both old system and current, who are not going to be going anywhere for a long time to come, regardless of whatever new system is put in place.