What is expected of a corporal?

They need to make a good cup of tea.

But on a serious note this is in many ways a training role. Your job is to help the sergeants by assisting with discipline (you’re a bit of a bridge between the SNCOs and JNCOs).
You should be proactive on helping with the uniform and raising any general concerns with your seniors. You should start taking more initiative in organising activities, helping allocate jobs on the cleaning rota etc. Start watching the sergeants and picking up on what they do.
The role will vary from unit to unit so also worth speaking to the staff about how they see your role developing.

It will differ in practice from squadron to squadron. There is actually a manual for it though. ACTO 48? I forget the number.

Basically, for me, they need to be the top of the cadets. They need to work hard, be selfless, be capable of organising a team, have good drill and dress, have good attendance and show they can put others before themselves.

They run our duties at the end of the night and our canteen. They sometimes help with junior cadet training, and they are generally the link between me and the cadets at the lowest level.

Ultimately that’s probably the main role of a JNCO - you’ll be enforcing discipline (remember that this is both pro-actively, and passively by way of setting a good example), managing minor tasks, coaching cadets, acting as a link-person between cadets and staff/SNCOs and quite possibly running some activities, especially as you increase in seniority.

and they are generally the link between me and the cadets at the lowest level.

Have to say I concur.Id also add that being a cpl is probably the hardest rank to work in.Your everything to everyone and can at times feel put upon as your essentially a bridge between the cadets and SNCOs and staff.The biggest mistake you can make is thinking that those two stripes give you some sort of power immediately you receive them.Beware as down that path lies bullying and major problems.Remember that anyone who holds any rank relies on respect to function.Setting the right example to those below you is the way forward.Its always the case that people will do things better if they respect the person giving the order rather than do it for the sake of it because they are ordered to.
Above all though enjoy being an NCO you ve been given the rank because your sqn commander and their staff have seen something in you that they feel is worth nurturing.Make sure that through your actions and behaviour their faith in you hasnt been misplaced.

To quote from the old ACP 31 Section 1

A Cdt Cpl will have specific duties and responsibilities and should be able to:
A. Recognise the need for discipline and be able to apply it with fairness and common sense.
B. Communicate clearly, orally and in writing.
C. Plan and organise a given task.
D. Command a drill squad.

B. Communicate clearly, orally and in writing.

So how come we have senior officers unable to do what is expected of 14-16 year olds?

Whilst I appreciate the humour, its not really useful on this thread.

When the manuals suggest a ‘quality’ that is a failing at the top, should be expect it as I say of 14-16 year olds? While it has a humourous connotation it has a serious edge.

Mind you I remember asking for cadets regardless of rank to write pieces for a newsletter we did a few years ago and many came back in text speak, which we had then to translate into English. We’ve had applications from 18 year olds with good A Levels and the standard of writing is poor.

I’ve always wondered what “Communicate clearly, orally and in writing” in particular actually means and how much weighting it should carry, especially when many kids have LD of some description. So should they be debarred from promotion on that basis? It’s never been something I’ve ever got that worried about, as long as they can get instructions across by telling people, job done. But even that is something that has to be learned and nurtured, as it won’t be something that fits in with their normal life experience.

That’s what I find confusing, how do u take charge of cadets who are older than you when ur a Cpl

That doesn’t change, I’m a Squadron Commander and I have staff who are old enough to be my Dad!

That’s what I find confusing, how do u take charge of cadets who are older than you when ur a Cpl

Once again it comes down to how you carry yourself and where you stand on the sqn.When your newly promoted its always hard to get into the groove because people still think of you at your previous rank.That happens in the world of work let alone cadets.The key is making them understand that you are the one in charge without going ott.If the cadets are older than you they should understand how the system works.If you need any support seek out cadet SNCOs on your sqn or if you have a Sqn WO seek them out too.Its in no ones interests to have problems.In fact one of my first duties tomorrow night will be to have a chat with a new Cpl I promoted just before Christmas just to make her feel at home and explain what I expect from her and the duties she ll be carrying out.Ultimately though its a welcome.

so, personal admin on a wet, windy, cold hillside, ability to look after/manage/lead others in the same environment, navigate, inspire confidence - and a decent turn out at the Sqn, attendance, volunteering for the less fun stuff, enthusiasm and application, particularly at the stuff that doesn’t come naturally.

each Sqn will have its own priorities, and therefore someone who might be considered a fantastic NCO in one Sqn might not even be noticed on one 10 miles up the road. 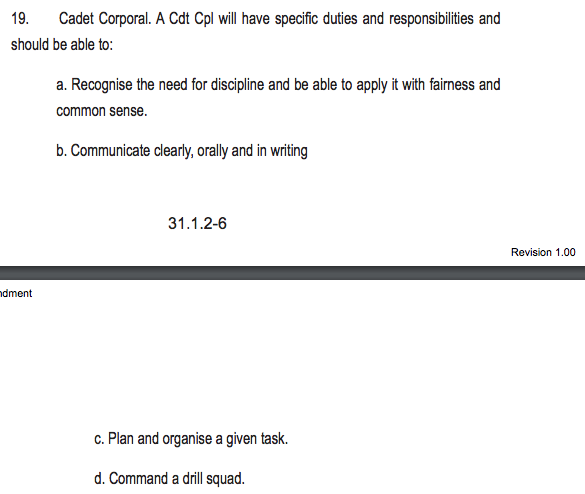 There are better, but also obsolete, lists than you will find in ACP31