What are you listening to....?

Following on from what are you eating and drinking…

What are you listening to?

Intermixed with LBC and muse.

You don’t strike me as a James O’Brien fan?

You don’t strike me as a James O’Brien fan?

Bed time for me after 2 weeks of attempted to be killed by my students in the circuit, them trying to get me in trouble with the CAA by getting faarr to close too the base of controlled airspace and the added fun of cadets.

I like to mix it up. Radio 4 for news. Lbc for giggles.

You should see my music play list on Amazon Music…

I still buy my music from iTunes, is that old fashioned?

At the moment im listening to probably the best Live album ever.
Thin Lizzy -Live and Dangerous.

I get Amazon music free, so I’m not going to pay for Spotify

I still buy my music

I’ve bought 3 albums in the past 5 years. Hardwired To Self Destruct Deluxe Edition (Metallica), The Astonishing (Dream Theater), and Distance Over Time (Dream Theater).

Some millionaires deserve my money more than others.

The last thing I bought physically before that was probably Biffy Clyro, Opposites.

Who chooses to use Amazon Music over Spotify

It makes sense, but I didn’t realise there was Amazon Music.

I use YouTube Music, because before that I used Google Play Music or whatever they called it to store my 20 thousand songs or however many it is I actually possess. I do not pay for premium. It was actually pretty good for me, because I’d known for ages that I “should try to give some newer and different stuff a try” and had a list of bands to listen to more of, but I never had a streaming service and wasn’t about to spend ages awkwardly searching YT to seek it.

The recommendations are pretty good, although it sometimes leans to heavy towards a certain band or two instead of mixing it up a bit more, at which point you can just change to a different “mix” if it gets boring.

Just to clarify it was a tongue in cheek comment - I can’t actually comment because I don’t even pay for Spotify - I’m happy with listening to the occasional advert - I just zone out.

Currently on my recent Spotify playlists… 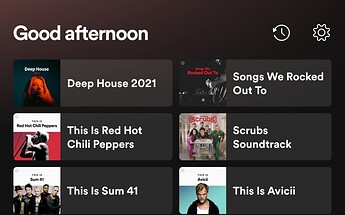 I blame @daws1159 for the Scrubs Soundtrack

We have amazon for most things… works fine. Has everything. Same as spotify, iTunes etc etc etc