I’ve been asking about this over on E-Goat, and it’s not strictly cadet related, so sorry about that. I’m working on the basis that there actually seems to be more traffic over here and a couple of posters almost certainly know the answer to my question (Hello, Gunner and Wilf_San…)…

Quoted from the Goat:

[quote]
So, odd question… did Regiment types ever, on the rare occasion they had to wear working blue with jersey, wear their stable belts over the jumper like some army regiments do? And, do they ever nowadays?

Was chatting with an ex-RAF bod about Regiment ‘differences’ and he said he was adamant that the belts were worn that way. When I came to think about it, I realised that I’d never actually seen a Gunner with reason to wear a blue pullover and a stable belt at the same time… [/quote]

Best answer I’ve had so far was that:

IIRC they used to and, I believe, QCS still do even though it is not in accordance with AP1358. (mind you the Corps tends to ignore the dress regs it doesn’t like).

Only at certain times I noticed the two times I was there though! Not as routine wear for teaching etc…

i cant say i have seen it myself but have deffo heard of it as a past thing. Although if i do recall there was a photo on the old sight of the Duke of York or Kent in RAF uniform doing it but then if i remember correctly they were trained pongos!!

As for the belt outside of the smock - most of us hate (junior ranks) but all those above with nothing better to do then sit in their warm office minus a smock love it making life more of a pain for those of us trying to get on with doing a job!

The DIs on basics seem to love doing it, but outside RTS I’ve never seen it, its either plain 2’s or 2’s with white webbing.

I’m pretty sure they don’t anymore either, they certainly weren’t wearing them when they took over ceremonial for 63 to deploy few years back. But hey its the raf reg, trends come and go, there was even a point not so long ago where II stopped wearing belts over their smocks.

This is an intriguing point, tango_lima. Firstly, accepting of course that the Regiment has tended to act as a front-runner for many of the dress changes that eventually spread to all other Air Forces of the Crown (cf greens, berets, stable belts), this last one is a bit of a puzzler in Air Force uniform custom and practice. I’m not sure why there’s such a reluctance to allow the belt to be worn on top of the jumper BG (outwith the Regt, I mean).

I agree, I too have seen some very high-ranking Offrs of a non-Regt type just randomly doing this, and that was even more the case ‘back in the day’ of the Pullover, Woolen, OG. People like the CAS and most of our HACs did this in greens very often.

But another factor that’s worth thinking about is how this actually started, in the Regt itself. The earliest that I’ve seen it done is from pictures dating to around 1947, with regular and auxiliary Regt Gunners from LAA and field Sqns, wearing a stable belt on top of BD blouses (yes, seriously), covering the wrap-around attached belt that was at the bottom of the blouse/jacket. This was in snaps taken at Catterick (I think?) but also out at other ‘2000’-series, pre-'57 RAuxAFRegt sqns.

And they then (stable belts, I mean) seemed to become very low profile outwith the Regt, especially during the RAF NS era, when BD morphed into tailored No2 dress, and eventually made an (outwith the Regt) reappearance in the early '70s in time for Shirts, Collar Attached, and the Star Trek zippy No.2 jacket. I have a feeling that when they came ‘back in blues’ (though they probably never went in the first place) they were initially only worn with the short-sleeve shirt. Now, at that time, like the stable belt, short-sleeve shirts were personal purchase only, and there was an absolute ban on them being worn off-station (in fact, probably just home station only). Even into the early/mid 80s, you would have been executed by the SWO for not wearing a tie on the station away from your desk or commcen etc. And stable belts would never (ever) be worn in public…but oddly, I’ve a feeling that this was probably the case for the Army as well, back in the day? Barrack dress meant precisely that, combats/OGs would never be seen on the streets unless you were shopping in Ulster.

All this has maybe caused levels of cross-ply confusion in the minds of the DPC. Or not…? But I’m stumped as to why the wearing of a stable belt is permitted at all when No2 blues, shirt sleeves and tie, yet not when wearing a jumper. It is primarily a decorative force ident item (when in blues) and on that basis there is a defendable logic in it being worn on top of the jumper by anyone that wants to.

As a related side-query, have they binned the plan for stable belts to be issued to all personnel that are required to wear RAF pattern uniform in the discharge of their duties? (note of course my careful choice of words…!-) Might that be the catalyst for this to be reviewed, and (re?) sanctioned?

Only at certain times I noticed the two times I was there though! Not as routine wear for teaching etc…[/quote]

WO ATF does as well.

Webbing and stable belts look ridiculous over jackets and jumpers; they serve no purpose and look terrible.

I wish the practice would stop.

What about white belts for banner parties? I always thought it looked very smart, and serves the purpose for the bearer of holding the strop in place better.

(also, I found that if you were wearing a round-neck jumper, you could use the belt to pull the jumper down at the front a smidge so the tie was more clearly visible.)

Having seen various army types do it and now found a photo of OC ATF, I can see the argument: but it serves no purpose over your jersey, it’s not holding your trousers up!

However, since they don’t issue us with trousers with loops wide enough to take a stable belt* then the belt never holds your trousers up unless you wear it with your combats. I do think it makes the uniform look more ‘military’, if you know what I mean.

General consensus seem to be that the Regiment does do it, but it comes and goes on different squadrons at different times, then? I’m up at Honnington in February, so I’ll have to see if I can spot anyone wearing blue (I doubt it somehow :lol: ).

*Wilf_San: I’d heard that this was considered by the AFB some time ago and was what gave rise to the story that everyone was getting issued the stable belts themselves…

I’ve seen it worn over the jersey but only on the odd occasion and never in public.

Personally, I think it looks quite smart. As you know, t_l, ex-Regiment personnel serving with the ATC are permitted under AP1358C, to wear the Regiment stable belt in both blue and DPM modes of dress. However, whether that extends to the Regiment practice of wearing it over jerseys, I don’t know.

[quote=“Gunner” post=2030]I’ve seen it worn over the jersey but only on the odd occasion and never in public.

Personally, I think it looks quite smart. As you know, t_l, ex-Regiment personnel serving with the ATC are permitted under AP1358C, to wear the Regiment stable belt in both blue and DPM modes of dress. However, whether that extends to the Regiment practice of wearing it over jerseys, I don’t know.[/quote]
[snipped]"

A white belt CAN look smart as soon as its put on. As soon as one sits down or bends over the jumper rides up and looks gash.

A white belt CAN look smart as soon as its put on. As soon as one sits down or bends over the jumper rides up and looks gash.

Thats because white belts are worn over jumpers with the white gloves and bayonet frog for parade practice, you aren’t supposed to be sitting down

Personally, I think it looks quite smart.

though I’d dodge wearing 2’s like the plague, dpm/pcs is far more comfortable

Man after my own heart!

[quote=“wilf_san” post=2006]
As a related side-query, have they binned the plan for stable belts to be issued to all personnel that are required to wear RAF pattern uniform in the discharge of their duties? [/quote]

Yes thank christ. Far better things to spend money on than that kind of douchebaggery. 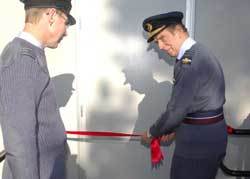 To whoever mentioned it’s existence earlier, here’s the picture.

As a side note, aren’t Regiment officers also allowed to wear berets in No2? Anyone know where that comes from? Cheers.