Air Officer’s (Rank only held by a current serving or retired RAF officer.)

Adult Instructor Non-Commissioned Officer Ranks: Not to be Saluted

(Adult NCO instructors served in the RAF as Aircrew only, Distinguished by a Gold RAF Eagle between the chevrons or Gold crown, or the Royal Warrant with an RAF Gold Eagle surrounded by Silver laurel leaves.)

Cadet Non-Commissioned Officer (NCO) Ranks: Not to be Saluted

Non-Uniformed Staff Not to be Saluted

Also thank you for getting FS right. It’s a pet-peeve when people write Flt Sgt or F/Sgt or similar.

Just for your safety.

Correct me what I got wrong so I can edit it on here to make you happy.

I think you mean Junior Officers, the same with the Senior, as you have already subtitled this section being for Commissioned Officers.

Group Captain isn’t an Air Officer Rank, and there is a RAFAC one now as the Senior Volunteer Advisor.

WO - Warrant Officer (ATC only)

Why is this ATC only, while the CCF don’t currently have volunteer NCOs they do have TEST SNCOs and Service Instructors in this rank.

This is just Sgt & FS, the Aircrew is obvious on the rank slide.

This isn’t a thing and MAcr is equivalent to WO

Uniformed Staff Not to be Saluted

Do you mean non uniformed?

Among some other edits,

Acting sergeants don’t exist. They are appointed as a full sergeant, the white tabs only signify they have not attended RAFAC Command & Leadership School — their probation is (at least) one year from appointment regardless.

If anything, all ranks after Fg Off up to and including Wg Cdr are actually acting ranks iaw AP1919A.

So what about Acting Sgt would that be ASgt?

Group Captain isn’t an Air Officer Rank, and there is a RAFAC one now as the Senior Volunteer Advisor.

It is still classed as an Air Officer rank

Why is this ATC only, while the CCF doesn’t currently have volunteer NCOs they do have TEST SNCOs and Service Instructors in this rank.

It’s it is not official, it’s not going in, when it does I will change it. Service Instructors are named “Staff”.

This is just Sgt & FS, the Aircrew is obvious on the rank slide.

Not many cadets know what an Sgt, WO Aircrew… rank looks like.

Not many cadets know what an Sgt, WO Aircrew… rank looks like

That doesn’t chance the fact that a Sergeant Aircrew is still referred to as - just - “Sergeant”.

Also, minor pet peeve. But none of your apostrophes are correct. It’s not “NCO’s”, it’s just “NCOs”.

Obviously, it is still refed as Sgt, but I stand to my ground, Not many cadets know what an Aircrew rank is or looks like.
Why? Because I painfully witnessed an FS salute at a WO “Aircrew” not knowing or seeing it Bless 'em.

Are you a full-time English teacher?

Why “stand to your ground” if it’s demonstrably wrong and you know it?

You’ve listed ranks and their abbreviations and then included things that are neither official ranks nor abbreviations, so if this is supposed to be a guide to help people, it’s not going to work.

I don’t have to be an English teacher to understand grammar.

It is still classed as an Air Officer rank

Nope group captain is specifically not an air rank. Uniform regs makes that clear and why they only have one set of scrambled egg.

It is not a guide, it’s a glossary. Things change over time, but if you so wish you can edit it if you want.

but I stand to my ground

It’s ok to stand by your original intent, what you put up is laudable.

It’s just when it’s not right you have to tweak it.

APO / APltOff is one that’s bounced around & seems a cadetism (due to Petty Officer being PO) the former is the generally accepted term as the correct term which I disagree with but until I get evidence to illustrate otherwise I have to accept that APO is the term used.

It’s not a big drama, but just one of those cadet world quirks

Where in the regs does it say, it seems that I don’t have an updated version.

Where in the regs does it say, 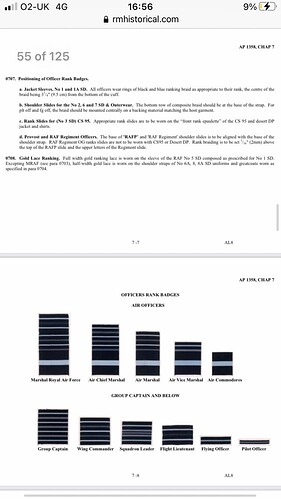 You need to put your phone on Charge.

(Note: This rank only is not to be saluted.)

This rank does not exist in RAFAC or CCF.

It does exist in the UAS and RAF, however they are not commissioned and hence not saluted.