Does anyone know the reason why officers (below the Rank of Group Captain), have peaks with a cloth peak, rather than shiny?

I’ve heard suggestion that it relates back to the Army who were often in field conditions and the cloth leak meant one less thing to keep polished - Can any confirm or otherwise ?

Because Officers below Group Capt can’t be trusted not to get finger prints all over them. And possibly crayon marks.

Don’t group captains and above get minions to polish them for them.?! But below that they can’t be trusted to keep them polished?

When the decision would have been made, every officer had someone to do their polishing for them. Alan Whicker had a batman as a second lieutenant, who famously polished his new suede desert boots.

Sorry to see no sensible answers to this yet - someone must know ?

Fabric availability at the time of uniform design…

I don’t know but if you look at early raf uniforms I think like the army everyone had fabric peaks.

Maybe like the ranks, it was a half navy half army job. Navy officers have shiny peaks.

There’s often a reason why things are done certain ways with military uniform, and to some it’s of great interest.

Things like why does a Commander in the RN wear ‘scrambled egg’ on their peaks, but their equivalent in the RAF (Wg Cdr) does not; why do the foot guards have their buttons grouped differently etc etc .

It may not matter to you, but to others it does.

I think ‘mattering’ and ‘being of marginal historical interest’ are 2 entirely different things.

But if you’re interested in such things theres no harm in that.

Frankly, I’d be surprised if any reason you find wasn’t made up. There’s a lot of these things of great interest that are post hoc, often contradictory, stories.

Unlikely. Remember back then all officers’ clothing was private purchase.

The best response on this so far is from @Tango_Foxtrot…but the whole thing needs unpacked for a bit of proper analysis. Too many people are far too close to this to be objective, and are blinded by superficial familiarity.

Firstly, let’s consider the overall situation for uniform design patterns aside from head-gear, for Officers, Warrant Officers & Other Ranks of the Royal Air Force and related Air Forces of the Crown.

A statement of simplified but indisputable facts:

Air Force Officers (whether commissioned or warranted for service) have always worn cap-badges, ranks & dress uniforms that are fundamentally naval in pattern (other than being blue-grey cloth and single-breasted cut);

Air Force Other Ranks have always worn cap-badges, ranks & dress uniforms that are fundamentally military in pattern (in the original sense of the word ‘military’, meaning “ground-based armed personnel”, which in the late 1900s referred only to army soldiers, marines on land, and their officers: the broader meaning of ‘military’ to include all offensive/defensive armed services has its origins in late WW2 & onwards).

However, the situation with ‘field officers’ in the RAF (which could be thought of here as being Sqn Ldr and below) was such that their cloth-covered peaked caps were intended to indicate their lower commissioned status, equivalent to 2nd Lt-Capt/Major in the RM & Army. Military tailors were also at that time used to producing cloth-covered ‘service dress’ peak hats for the junior and middle-ranking officers that were required to personally-purchase >all< elements of their uniform.

It should also be borne in mind (and this is all prior to the modern FADS/Future Army Dress System, which I need someone to explain to me) that to a close approximation, most forage-cap (ie visor cap) wearing regiments & corps of the British Army traditionally wore two different patterns of peaked cap, one referred to as ‘regimental full dress’ (apparently referred to as ‘blues’…even when made with a red crown, such as for eg RMP) and this type of peaked hat tended to have a patent-leather ‘naval’ style of peak.

Whereas, when Army personnel were wearing a “service dress peak cap” in their No1s or barrack dress, this had a plain khaki crown and similar cloth-covered visor. (There seems to now be an odd official reversal of standards for this in the modern Army, where instead of the widespread wearing of ‘blues’-style fulldress caps in their No1 dress and barracks, they’re by regulation now expecting basic khaki cloth ones to be worn: presumably FAD…if I were to guess, the Household Division may not follow this direction).

The situation for cloth-covered peaks being worn by Fg Off to Wg Cdr inclusive almost certainly relates to the ‘field’ nature of their rank, deliberately distinguishing them from Air Officers, whilst with Aircraftman to Flight Sergeant the wearing of leather (originally, non-patent/unshiny) peaked caps as their own ‘regimental’ headgear as service dress was a step-up from basic cloth.

Thank you - exactly the type of reply I was hoping someone may come up with.

Now, why did junior Army officers have cloth peaks?! 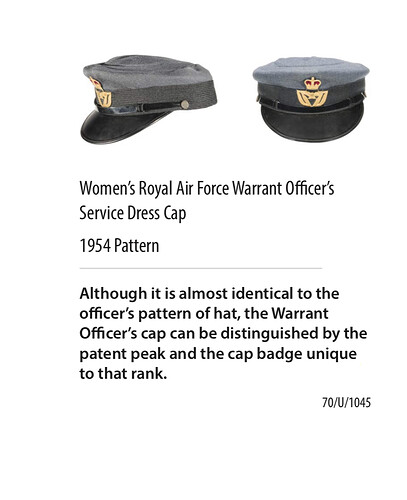 Historically female WOs had shiny peaks like their male counterparts. I wonder why this changed ?

I thought it was because it was - literally - field uniform and was expected to be worn in combat. So easier to maintain and harder for the other side to see. By extension the head sheds didn’t need a khaki peak as they were less likely to be on the wrong and of a Mauser and had underlings to maintain their kit.

But I could be wrong…

Historically female WOs had shiny peaks like their male counterparts. I wonder why this changed ?

Interesting…this to me looks most like an WRAF bandwomans’ hat from circa1955.

I’m fairly-sure that in my time (well, from the 1970s, through to the present day) that female RAF WOs if wearing SD peaks, have just worn female Offr pattern ones (as they do at present).

Might this have changed on 1 Apr 1994, when all members of the WRAF were transferred to the RAF? 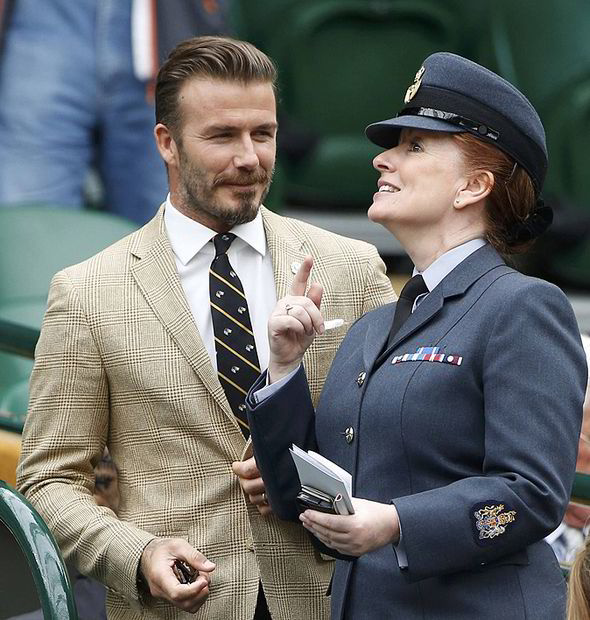