We’ve done lots of research and engagement with CFAV, cadets, new joiners and parents (including many here) so hopefully the website will serve its purpose of selling the organisation, particularly to new CFAV, cadets and their families. Thank you for everyone that got involved, as I know many of our research participants signed-up via ACC.

The website will continue to develop, so we’ve launched with a refined site (we had a lot of redundant or out of date pages), and we’re going to do our next user research session during February to inform the next set of improvements.

That said, as is expected, we know there will be some bits that need improving or tweaking straight away and we already have a full list for updates and fixes tomorrow. If you do see anything, please email influence@rafac.mod.gov.uk and we’re triaging getting stuff done quickly. We’re also soon be asking squadrons to confirm their social media accounts and send us a crest as we improve squadron finder further.

Any feedback and thoughts welcome.

[Mod edit to add the link to the actual website]

and send us a crest as we improve squadron finder further.

Does this not already exist within SMS? Maybe as part of the units roll-out you could get units to make sure their crest, if they have one, is up to date!

Looks really good, definitely needed a revamp. Glad to see the RAF website has a “Cadets” link prominently displayed too!

Will shoot you a DM, spotted a couple snags

Overall a good design, I can see how you have endeavoured to keep something of the theme from the main RAF site whilst making it friendlier.

My only feedback is that there is great diversity shown amongst the Cadets, but volunteer wise it doesn’t reflect that there are many among us who haven’t got that many grey hairs yet. I am convinced we also have many female volunteers too

(Yes, I did spot the Pilot Officer on the ‘Being a volunteer’ page

Looks great, I really like the large video on the homepage.
Slightly odd phrasing on the squadron finder. I’ve not heard “Parade Days” before, only “Parade Nights”. Both terms are potentially quite difficult for new starters to understand, but I’m not sure I can think of anything better. “Meetings” or “Open on…”?

Absolute minimal thing… not all sentences have full stops. All or none!

All in all a good effort for all involved

Whilst I hate the first comment I make to be a negative, that was also the first thing that I noticed.
Big blocks of cyan, yellow, and green aren’t exactly our brand.
From an aesthetic point of view, it felt a bit jarring against the predominantly white layout.

I’d argue too much focus on the homepage on flying - false expectations.

Glad to see the RAF website has a “Cadets” link prominently displayed too!

One of the best bits, and It wasn’t hard to convince the RAF and they’re very supportive at Air Media in working together more. Means we’re essentially sitting above many other parts of the RAF on their website. I’m very interested to see what kind of traffic it gets us, and if it leads to new volunteers or cadets.

So it’s actually a CFAV pointing at a cadets badges, but it gets cut off on certain sites. We’re looking for alternatives, just need more pictures of happy CFAVs.

You’ll need to find some happy CFAVs for that… here’s probably not the right place to find them!

I’ve not heard “Parade Days” before, only “Parade Nights”. Both terms are potentially quite difficult for new starters to understand, but I’m not sure I can think of anything better. “Meetings” or “Open on…”?

Good suggestions, added them to our trello board to discuss.

Big blocks of cyan, yellow, and green aren’t exactly our brand.
From an aesthetic point of view, it felt a bit jarring against the predominantly white layout.

Interestingly this was positively received during user research. You’ll see a survey live on the site now as we doing the next round soon, and we’ll be focusing more on the homepage, so this can be explored a bit more.

Technically as well, this is on brand. This is the secondary palette of the RAF, and while we mostly use the red and blue as they do, the thinking was it’s still within brand guidelines but gives a degree of separation and plays to the ‘youth’ side. We’ll see if we get similar feedback in the next round of research and we can amend if it’s not received well.

Looks good!
One thing that is a bit jarring though is the video player at the top is seeming to cut people’s heads off at the forehead. I suspect that it’s because this is the layer that’s furthest back and doesn’t account for the fixed navigation bar at the top!

Technically as well, this is on brand. This is the secondary palette of the RAF, and while we mostly use the red and blue as they do, the thinking was it’s still within brand guidelines but gives a degree of separation and plays to the ‘youth’ side

I certainly concur that too much use of red and blue would stifle the creativity a bit, and some of our own identity within the parent brand is good.

Although, unless there’s a newer version of the style guide than I have (which is entirely possible), that yellow, green and cyan don’t appear to be in there. 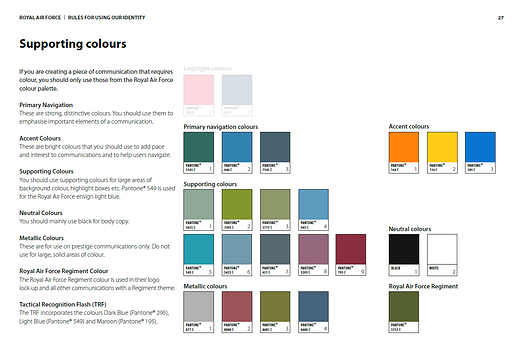 Really, large blocks like that are what the supporting colours are for.
For a quick and dirty example: 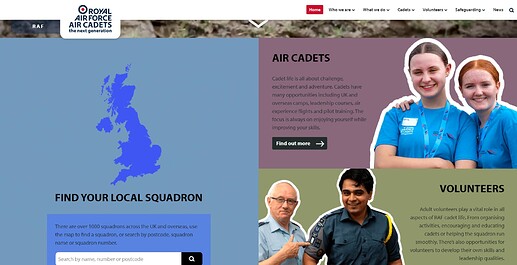 To my eye at least, that’s just a bit more ‘branded’ and a bit less "Blarrghhh!

Even if you wanted to retain yellow, blue, and green, using the Accent 2 yellow would be less garish: 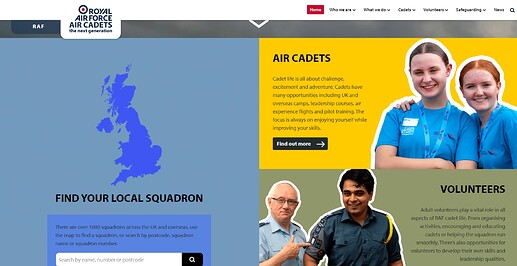 Is it possible to add the Parade times to it as well?

To save hikacking the thread, happy to switch to DM.

You’re right in that it’s not in current guidelines, but these were the colours suggested by the RAF as secondary. I wondering how much of that is by future design, or more mistake, or more a push to evolve.

That said, i think the first image you added lacks the vibrancy that seems to have landed well with the those in research. The second is closer with the yellow, but I still feel i’s a bit bland, but thats my personal opinion. I will speak to the agency we’re using to look at mock-ups of different colours during the UX research.

Another minor thing is perhaps detail uniform a bit more, currently just says you will get a uniform, then mentions boots and parade shoes, without much context.

They would really put the cherry on top for me!

Some of that is coming. We originally had a lot more pages scoped for going live. We decided to cut it back to go live (as contracts also came into play) but we definitely have some more pages to work on.

During initial research, uniform was a big need from parents and cadets. We were trying to balance this being for recruiting people and supporting current members. One particular need was for links to retailers for boots et al, but we said this wasn’t an initial priority and we were worried about supporting particular larger online retailers over local suppliers. What context to you think we should add in the get that cherry?