Given that the return to f2f document says that command tasks can only be done using MTa kits does anyone have any suggestions on which kits to buy?

We don’t have any but thought it worth doing some research if that’s the only way we can do it.

Each wing got STEM MTa Kits provided about 18 months ago, or they are housed at region depending on where you are.

May be better than purchasing, trial the ones the RAFAC have provided.

The STEM kits are similar to the main MTa Kits

Speak to the guys at MTa. One was involved with the ATC at some point I think, I discussed what I wanted and they recommended a package and gave us a good deal.

Does this mean we can’t even use the kits which we splurged all that money on to keep in those awful trailers?

If you looking for equipment for indoor use at a Sqn the below is worth a look,

The reason I’m looking is that the ‘Return to F2F’ document explicitly mentions MTa kits only.

I’ve always felt that the MTA kits are massively inferior to (and significantly more expensive than) a selection of pine poles, scaffold boards, ropes, oil drums and a couple of tarps.

Now, obviously the best types of activity we used to do aren’t feasible at the moment, but if indeed the order is ‘MTA kits or no command tasks’ then my approach is going to have to be ‘no command tasks’.

Maybe we’ll be lucky and it’s just poor wording - like the ‘sit on kayaks only, but normal kayaks are perfectly okay also’ debacle. 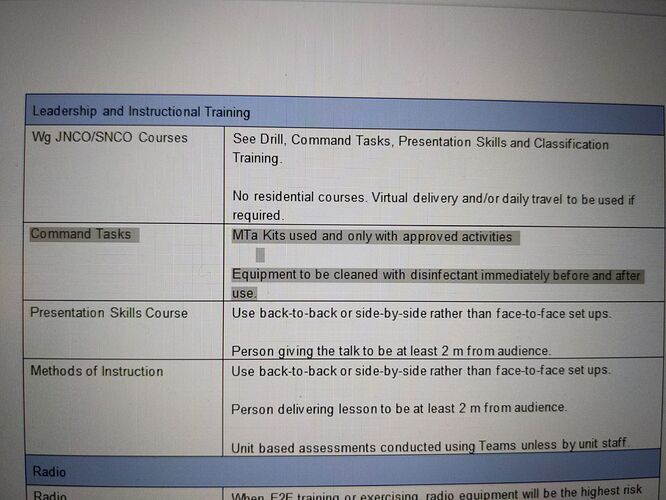 This is the actual wording.

I’m hoping there is wiggle room, because we have a lot of plastic kit - barrels, cones, etc - which is no less able to be cleaned than the MTa plastic… Seems a very arbitrary and pointless cut off if it really is only that kit. We’re not spending a grand on one set of mediocre Lego.

We’ve never bothered going down the MTa route in the past because we’ve got the usual collection of planks, tyres, pallets etc. which as you say is better.

But frankly I’d rather have something than nothing when we return.

Yeah, I read it with a mixed sense of ‘WTF?’ and sorrow…

But the document also says “sit on kayaks only” in one section and then in the other it allows normal kayaks and makes clear that they meant “single occupancy”. Presumably whoever wrote the first bit doesn’t understand kayaks.

Clearly this is the usual cluster

Why can I put a cadet in a solo sit on top kayak, but not a solo open canoe?

Given the ‘expansion’ in the latter part of the document which makes it clear-ish-sort-of that it’s merely single occupancy that is the spirit of the regulation, I reckon you’d probably be okay solo in a canoe.

I’d say the MTa kits potentially need more cleaning, lots of small ish parts.
There are a few command tasks in the book that need no kit at all, or could be done with disposable equipment and adjusted to avoid any close contact. It does seem a bit restrictive.
They would perhaps end up less as ‘command tasks’ in the conventional sense and closer to problem solving activities though.

This… if you want to do something else then get the RC to authorise it.