I was recently doing a research task for cadets

on the milestones in the RAFAC

please could you comment on what the milestones were

If you stretch it, indirectly you could argue that the formation of our parent organisation in 1918 was a milestone. The creation of the forerunner to the ATC, the ADCC was 1938, then the ATC itself in 1941.
The 1980s? Probably opening up the ATC to female cadets.

Technically there wasn’t a RAFAC until 2017, there was an ATC and a CCF and an ACO however.

There still is an ATC and CCF. Some people seem overly keen to forget that.

Very true the ATC and CCF are still separate entities but come under the RAFAC umbrella.

Absolutely for ATC and CCF, but RAFAC no. RAFAC is purely an artificial political renaming construct to make the RAF look bigger and like it gives a monkey’s.

Hope this helps for a history of the ATC. They are from a first class ‘revision guide’ that can be found here: https://drive.google.com/file/d/18TLw7DGXSEbqDl3S6OMQaWWxB1ZJ62lF/view 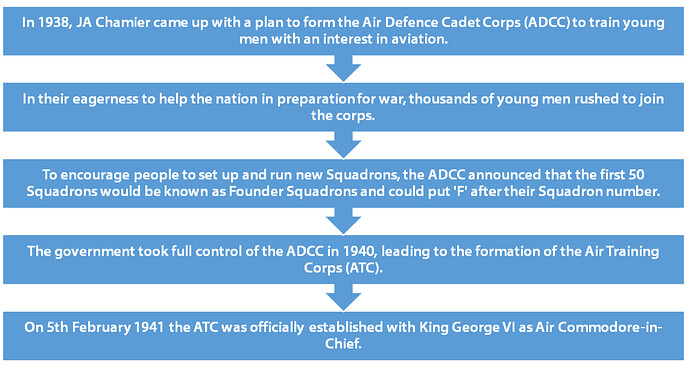 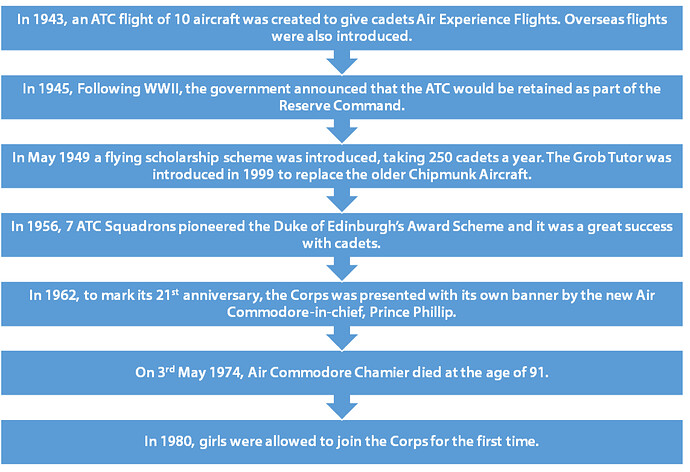 If the former, then you also need to find out about the public school Officers’ Training Corps ‘air sections’ in the 1930s. They predate the ADCC and were usually a sixth form option for boys who’d passed their Army Basic tests. Ours (Radley) wore Army uniform with an RAF armband and there are photos in ACP 31.

The Tutor replaced the Bulldog not the Chipmonk.

I thought the the first 50 numbered ADCC squadrons only became known as “Founder” when the ATC was formed in 1941. Until that point they were just 1,2,3 … 50 (Wherever) Sqn.

Also while yes girls were allowed to join in 1980, it was very much an experiment (2 years if memory serves) and limited to 2 or 3 squadrons per Wing and there were restrictions on what they could do… IIRC girls were given open entitlement in 1984/5, but squadrons had to have female staff.

It doesn’t mention the formal introduction of Wings in 1948(?).

It doesn’t mention the formal introduction of Wings in 1948(?).

Also the Morris report in the ln the late 1960s with the formation of 7 regions.

The LaSER report with the introduction of Sgt and FS ranks to the ATC. Can’t remember when WOs were introduced.

Absolutely for ATC and CCF, but RAFAC no. RAFAC is purely an artificial political renaming construct

In a sense you are correct, but in another sense you must be totally wrong.

In the most-recent editions of the London Gazette which have detailed such movements, a large number of Officers are individually (and collectively-listed) as having been discharged from a formation listed as being the RAF Air Cadets.

Since the London Gazette is (as we all know, by its nature) a newspaper with full legal standing in respect of Royal Declarations and announcements of statutes, awards, promotions etc it is impossible for anyone to say that there is not an actual formation in some sense beyond mere collective branding called RAF Air Cadets.

There is still a simple acid test for this proposition: since we can see all these Officers departing RAFAC in the Gazette, it would be a reasonable presumption that any brand-new Officers will be shown as being commissioned into that formation, and not either the ATC or CCF(RAF)…and that is irrespective of the ongoing (welcome) existance of those seperate component formations within RAFAC.

And if there is equivalency of recognised merit, in the same way as RAF/RAFR/RAuxAF Warrant Officers are listed in the traditional Air Force List (legacy hard-copy and now just DII, plus gazetting as required) it is not unjustified to expect that RAFAC Warrant Officers appointed to a new Royal Warrant are similarly-listed.

It doesn’t mention the formal introduction of Wings in 1948(?)

But as I understand it they were ‘local’ groupings not much bigger than modern sectors and just called themselves Wings to sort of formalise and not wide geographic and administrative entities.
I say this as I remember speaking with a couple of old boys who were ADCC/ATC cadets on my old cadet squadron and they only ever had dealings with 2 other squadrons, arranging football matches and other competitions and they were part if a ‘wing’ of 7 squadrons, but never anyone of anything of the others. I suppose they had to rely on buses and trains as cars for the masses were still a way off. Mind you even as a cadet I remember not going as far as we do now and as regularly as we do now for things.

If your task is history of the RAFAC, the write one paragraph describing its birth.

If it is the ATC (it should be it you are an ATC Cadet… Remember being welcomed as ‘a member of the Air Training Corps’ when you were enrolled?) then we have a rich history. Some detailed above.

If the person tasking you meant ‘the ACO and the RAFAC’ then you must include milestones in the CCF too.

Personally I think that too mush weight is being put on the RAFAC. The ACO was never as prevalent, it was merely the umbrella organisation.

I still don’t understand some of the concepts.

Officers were RAF VR(T) but now they are RAFAC. RAFAC shouldn’t have replaced the ACO as RAFAC replaced RAF VR(T), not The ACO. Our umbrella organisation was never RAF VR(T)

To confuse matters further WO(ATC) is now WO(RAFAC) WHY? Why should that ever change.

So please be sure what your tasker wants, ATC or ACO (and a tiny bit of RAFAC)

RAFAC = ATC & CCF(RAF) since the dawn of time, it isn’t a new organisation, just the term used to describe 2 organisations.