Her Majesty The Queen has graciously approved changes to various flying badges in order to rationalise them under ASTRA for the Next Generation Royal Air Force in its 2nd Century.

This IBN serves as a formal record of the policy changes as at 1 Apr 20 prior to publication in Service documentation.

• A new Airborne Specialist Flying Badge is being introduced to rationalise Fighter Controllers (FC), Airborne Technicians (AT), Airborne Image Analysts (IA) and Reaper/Protector Mission Intelligence Coordinators (MICs) under a single badge. Airborne Specialists will be accorded the same Honorary Aircrew status as Parachute Jump Instructors in the next revision of Queen’s Regulations.

• Inconsistencies with the current WSO/WSOp Flying Badge for Mission Aircrew have been corrected.

• Entitlement to award the current legacy flying badges ceases on 1 Apr 21. In the interim, entitled personnel may purchase, at personal expense, the new badges for wear on FACS and PCS from 1 Apr 20 (see Annexes A and B). The new badges for No 1, No 2 and No 5 Dress should be in stock
by 1 Apr 21, and qualified MICs (including previous qualified) are awarded entitlement from 1 Apr 20 to wear personal expense items. Defence Clothing will no longer stock legacy flying badges and personnel are positively encouraged to adopt and wear the new ones under ASTRA as part of the
Next Generation Royal Air Force.

The Pilot Flying Badge was the first ever badge of its kind and has largely remained unchanged since His Majesty King George V authorised its first use in 1912 for the Royal Flying Corps (RFC) – to be known as the “1912 pattern”. The Observer Flying Badge, introduced in 1915, was a single-wing design that was eventually replaced by iterations of the Air Gunner Flying Badge in 1939 – to be known as the “1939 pattern”. The WSO/WSOp Flying Badge, introduced in 20031 , made an extra embellishment to this pattern
with the addition of a Sovereign’s Crown.
On 13 Sep 19, Her Majesty The Queen most graciously approved the rationalisation of the RAF flying badges to feature just 7 designs in order to simplify the stock system, modernise the terms used and to correct some inconsistencies. The designs of the new badges are at Annex A and the evolution of the various Flying Badges is recorded at Annex C and D as a matter of formal record. The 7 RAF flying badges rationalised wef 1 Apr 20 at Annex A are detailed as follows:

WSO/WSOp Flying Badge (NSN: 8455-99-821-4018). Based on the 1939 pattern badge but embellished with the letters ‘RAF’ and a Sovereign’s Crown. After the recommendations of the 2001 Rear Crew Paper and the 2003 Airman Aircrew Study, the WSO/WSOp Flying Badge replaced all previous RAF non-pilot flying badges of the Flying Branch and Non-Commissioned Aircrew (NCA) cadres. Personnel that qualified for the legacy Flying Badges prior to 1 Apr 03 are entitled to continue to wear them but may elect to change to the WSO/WSOp Flying Badge. The sealed-pattern of the WSO/WSOp Flying Badge agreed in 2000 contained several errors (including an incorrect 11 trailing-edge feathers and too steep a wing) which will be corrected by new stock from 1 Apr 21 to the design at Annex A. Personnel purchasing, through personal expense, RAF flying badges from 1 Apr 2020 for FACS and PCS shall ensure they comply with the new pattern designs at Annexes A and B. Defence Clothing no longer stock legacy flying badges and personnel are positively encouraged to adopt and wear the new ones under ASTRA for the Next Generation RAF.

Airborne Specialist Flying Badge (NSN: TBD). Based upon the 1939 pattern badge but embellished with the letters ‘RAF’. The Airborne Specialist Flying Badge will replace the Fighter Controller (FC), Airborne Technician (AT) and Airborne Image Analyst (IA) Flying Badges from 1 Apr 21 when badges are expected to be in stock. Intelligence Officers and TG11 Personnel who are, or have previously, qualified for MIC duties operating the Reaper or Protector RPAS will also be entitled to wear the badge on successful completion of the 54 Sqn OCU. Entitlement to wear legacy flying badges awarded prior to 1 Apr 21 in lieu of these new ones will remain. In the interim, entitled personnel may, at personal expense, purchase and wear the new style badges for FACS and PCS from 1 Apr 20 if they comply with the new pattern designs at Annex A. The Airborne Specialist Flying Badge for No 1 and No 2 Service Dress is unlikely to be in stock until 1 Apr 21. Defence Clothing will no longer stock legacy flying badges and personnel are positively encouraged to adopt and wear the new ones under ASTRA.

Parachute Jump Instructor Flying Badge (NSN: 8455-99-127-1400). Based upon the 1939 pattern badge but embellished with a parachute in the centre. There are no changes to this badge.

Preliminary Flying Badge (Pilot) (NSN: 8455-99-127-1422). First introduced on 8 Sep 49 for the RAFVR and Auxiliary Air Force, this badge is still awarded to Pilots of the University Air Sqns (UAS) only. It is no longer worn outside of UAS service. There are no changes to this badge.

Honorary Aircrew Status. In 1945 Parachute Jump Instructors were conferred ‘Honorary Aircrew’ status within King’s Regulations. The same is true for today’s Queen’s Regulations and a future revision will confer ‘Honorary Aircrew’ status to the Airborne Specialists in Regular and Reserve front line service. It should be noted that ‘Honorary Aircrew’ status does not affect the basic conditions of service for their Branch or Trade but just recognises that they are operating the aircraft as part of the crew rather than in a passenger capacity. Use of the term ‘Flying Badge’. With acknowledgement to the work of the RAF Historical Society, it appears that sometimes the word ‘Brevet’ has been incorrectly used. Ever since the 1912 report on Aerial Navigation, and a subsequent King’s Order, the correct term has been ‘Flying Badge’ and not the incorrect term ‘Brevet’. The word ‘brevet’ is, in fact, French and means a ‘diploma’ or ‘certificate’. It is thought that the error crept in through the years via the confusion when aircrew were presented with a brevet (a certificate) at the same time as a flying badge. All documentation with erroneous use of the word ‘Brevet’ shall be corrected forthwith.

Badge Manufacture at Personal Expense. Personnel paying for badge manufacturers to produce RAF Flying Badges at personal expense shall ensure that they meet the design specifications set out at Annex B. These badges have been subject to Royal Approval and so no changes to their shape or embellishment of their design are to be made. Colours should be preserved in their manufacture unless a single-colour ‘tone-down’ badge is required for tactical purposes. The Fg B&TAs will notify the normal badge
manufacturers and personnel should ensure that their badges meet the designs at Annexes A and B.

Those that do not meet the approved design and specification may be asked to be removed by the relevant chain of command.

ROLL OUT PROCESS
Changes to the new flying badges take effect between 1 Apr 20 and 1 Apr 21. From 1 Apr 20, entitled personnel (in accordance with QRJ727) may wear the new badges on FACS or PCS. Qualified MICs (including those previous qualified) are awarded entitlement for the Airborne Specialist Flying Badge from 1 Apr 20. Extant flying badges may be awarded up to the cut-off date of 1 Apr 21. Personnel, who qualified for the legacy flying badges before 1 Apr 21 may elect to continue to wear them but should note that the legacy badges will no longer be provisioned through Service sources. All entitled personnel are positively encouraged to adopt and wear the new flying badges under ASTRA.

The Fg B&TAs shall ensure that the new designs are available via the Defence Branding Portal and will notify some of the major UK suppliers of the new designs for the personal-expense badges. It will be the individual’s responsibility that these badges meet the design criteria and are worn in accordance with AP1358. Personnel not complying may be asked to remove them if noted to be non-compliant.

The Fg B&TAs will amend QRs, MRPs, JSPs, APs and other documentation as soon as possible.

New flying badges are unlikely to be in Defence Clothing Stores prior to 1 Apr 21.

ADDITIONAL INFORMATION
Routine enquiries and requests for further information relating to RAF flying badges should be addressed to the Fg B&TAs. The RAF policy lead for QR 206 and QRJ727 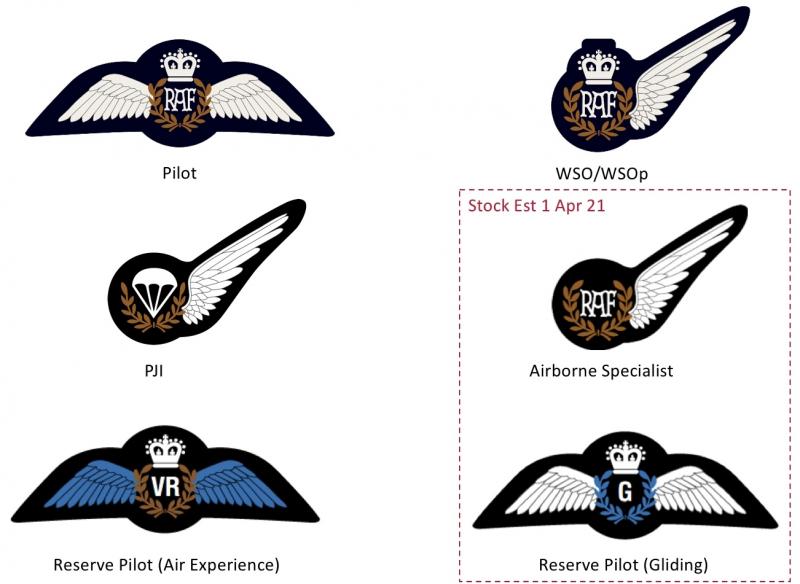 Interesting… I really like the glider brevet actually, will be nice to see some in the flesh

I think all the badges there are very good looking.

I would edit this and say for RAF / RAFAC civi qualified pilots.

It would make sense for the raf to recognise all those who hold civi pilots licences or at least above a certain standard. After all it is the main flying branch of the forces.
A badge like the air cadet ‘C’ but for RAF personnel and RAFAC CFAVs.

Are you thinking of RAF style wings for CFAV with a PPL? Interesting thought. Is the training to get a PPL similar to or perhaps more than that for gliding wings?

Flying both SEP and Gliders, the training to fly powered aircraft is much more intensive and difficult than gliders - not to take away from the skill of soaring; which is an art form.

@Paracetamol yes, that should be phrased for across the board.

I see @GoodEgg, you’ve dragged the same point across form another thread, which I think was discussed at length - not sure why you feel it’s relevant to make this point again?

Flying both SEP and Gliders, the training to fly powered aircraft is much more intensive and difficult than gliders

Hmmmm, doing a circuit in a glider, you don’t get the chance for a go around!

I see @GoodEgg, you’ve dragged the same point across form another thread, which I think was discussed at length - not sure why you feel it’s relevant to make this point again?

I don’t know what the “other thread” was, but given that this thread relates entirely to an IBN which makes provision for new flying badges for RAFAC personnel I rather think that a comment regarding eligibility and the lack of recognition of civilian flying qualification is, whether accepted or not, entirely relevant here.

The key word in my statement was ‘again’.

Ah, I see you’re using less speed more pressure to close this down.

THIS thread is about flying badges and as far as I can see it’s only been mentioned once in here.

You might have seen it elsewhere and decided that it’s not relevant, but I haven’t; and others may not have.

Just leave it guys. Don’t rise to the bait.

I think we can however… confidently say that if a badge reorg has just happened, no matter the argument or forthrightness on here. They ain’t gonna bring out a new badge now!

VR badge is shiny.
Might ask if I can undergo a flight test in a tutor. Get issued badge.

Where is the preliminary flying badge on this chart?