History buffs of ACC! I need you! 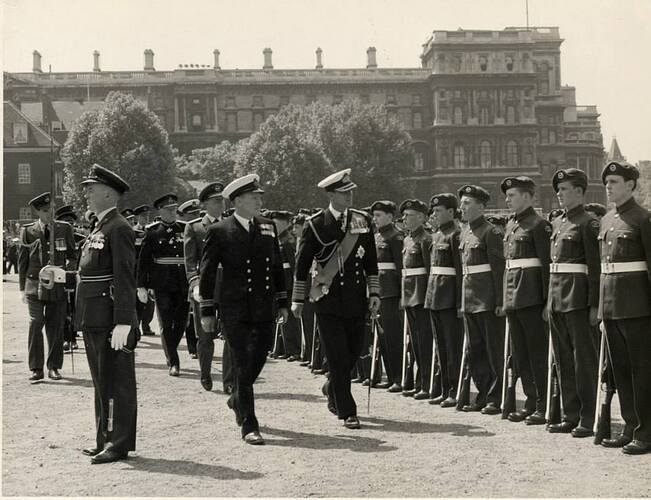 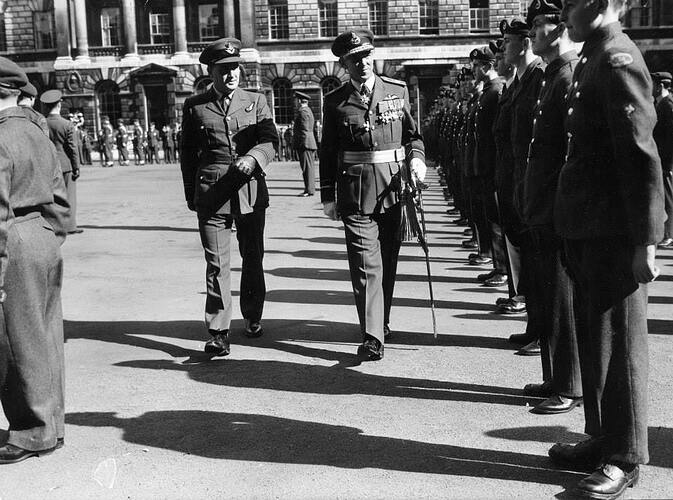 The second pictures shows a sqn number 2 digits in a very large badge. That would of been an original ADCC unit.

Perhaps something to do with that?

The naval chap in the first photo is the Duke of Edinburgh.

yeah, thought it was the DofE.
I also wondered if it was linked to the Queens Birthday. Edit - Or even her coronation!

Having found no mention of a cadet parade with the Duke of Edinburgh at Horse Guards Parade in 1953, I now believe the photos were incorrectly labelled.

Am puzzled by your date reference. The big RAuxAF cull actually happened in 1957 (similarly the demise of the RNVR flying NAS). I thought the overall shakeup of Reserve Command itself also was late 1950s? Happy to be corrected

Really interested by this comment- other than the original 602 Sqn (obviously now reformed and reactivated) I was totally-unaware of any other auxiliary sqns (flying or otherwise) associated with Glasgow. Please do give some more detail (and Happy Xmas to you, and the forum!)

I knew The raf reserve was the 50’s they were disbanded I was having a guess.

The raf reserve was the 50’s they were disbanded

Pretty much. In particular, all the Auxiliary Air Force flying squadrons (as you said) were disbanded in 1957.

But the auxiliary and volunteer reserves of the Air Force continued right the way through 60s to the present day (including the specialist RAFVR flights, which became absorbed as RAuxAF sqns in the 1997 merger).

Over that time the RAuxAF Fighter Controller Units disappeared, and the major Maritime Control Units were stood-up to support the permanent NATO Command UK HQs, acting as the nucleus for the major “600-nameplate” relaunch/retask in 1997.

The RAuxAF Regt has gone through phases of minor growth and decline over the years, relying mainly upon STO/FP, but took a real hit after Rapier GBAD was pulled and given to the Army.

The auggie medics & mover squadrons have been steady since around GW1, and (ironically) the only true RAFR formed unit, the MMU (since all the other formed units are, or were intentionally RAuxAF/ accidently RAFVR / incidently RAFSR) continues to be stood-to in mobilised mode.

Hence we now see the branding “RAF Reserves” applied as a branding simplification and a broad coat of paint: in exactly the same way as “RAF Air Cadets” is used as a spray-coat shorthand to make things easier now that we’ve circled the wagons.

Can I take this opportunity to wish everyone on the forum a Merry Xmas, and to ask everyone that is in, or associated with, RAF Air Cadets/CCF RAF/Air Training Corps…please: try to learn more about your Air Force heritage in 2020. The lack of understanding about the true role and contribution of the RAF’s reserves is appalling, within the broader RAF family, or the public…and it shows no sign of properly improving any time soon

Always blown away by your level knowledge.

Would you be willing to write an idiot’s guide to the RAF’s reserves for those of us who know nothing? Maybe in a new thread?

Would you be willing to write an idiot’s guide to the RAF’s reserves for those of us who know nothing?

That might be a good idea. If I do, I shall make it very-clear to state exactly what is a matter of historical fact, and also clear markers where conclusions/inferences can be seen logically to be the case.

And for those that say history is unimportant, and all that matters is the future: they are being very foolish.

A good example of this was the confidently-asserted and (apparently) totally-unresearched statements made in the run-up to 2017, about how the CFC was the first ‘new type of commission’ created since the 1800s.

It worries me that I appeared to be the only person still alive that realised this statement was completely (and relevantly) wrong. George VI actually granted Cadet Force commissions specifically for ADCC officers in the prelude to the raising of the Air Training Corps (this is a documented fact, as I’ve already shown here on this forum).

There’s lots of broader Air Force heritage and history (sometimes barely in the margins) that really does deserve to be recorded, remembered and understood: especially by members of the RAFAC.

Failure to do this is not just disrespectful to those have now passed away, both in war and peace, but is just utterly-wasteful in terms of understanding & consequent advantage.

A major advantage the Army has over the wider RAF is its regimental & corps traditions, which appear to be enriched as a consequence of historical mergers and changes over the years, supported by all the different associations & veterans. The Navy is also very-good on preserving relevant traditions & history. But the broader RAF really struggles with this…and I think the rather-understated RAF100 events illustrate my point.

In comparison, a substantial chuck of RAFAC nowadays hardly ever gets to meet and converse with current members of the regular RAF or its reserves, let-alone any Air Force veterans. Generations of Air Cadets & RAFAC Staff can be utterly-oblivious to massive chunks of RAF history (whether WW2 or as recent as current conflicts).

I (and my contemporaries) are not getting any younger. For me, having had flt cdrs that served in the Battle of Britain, served alongside guys who were on the beaches at D-Day, and having watched Phantoms head off fully-armed to engage a flt of Bears are facts of life. But we will soon be gone, too…

A good example of this was the confidently-asserted and (apparently) totally-unresearched statements made in the run-up to 2017, about how the CFC was the first ‘new type of commission’ created since the 1800s.

Things like this seem to be quite endemic in the armed forces. I’ve seen videos of Guards officers repeating the myth that they literally stole their bearskins from Napoleon’s Old Guard at Waterloo.