@AlexCorbin I half expected to see you on this - World Shoeshining Championship!

Just a shame that Saphir costs so much otherwise I’d invest and get to work on mine.

I’ve been told by several people saphir is great

20 minutes for one shoe!?
Why am I not in this competition? 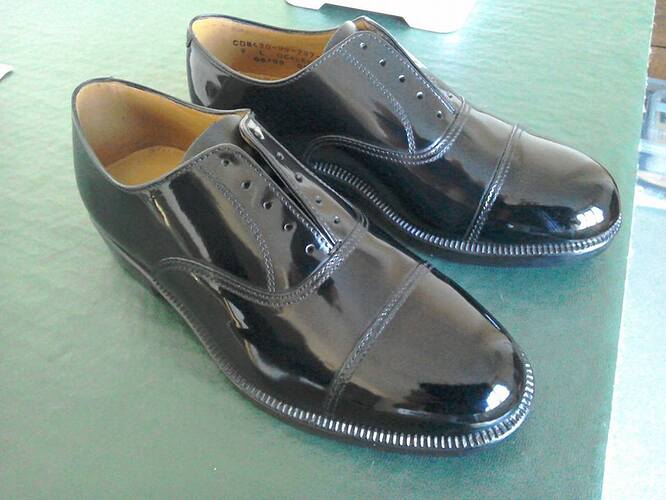 Brand new or beeswaxed as there’s no toe crease

Brand new.
I did try to impress on the customer how important it would be to get them broken in before I bull them.
They didn’t get around to it.

Still… I fulfilled my end of the contract.

Novice mistake… Gotta give them a good walk in. I have my oxfords beeswaxed and bulled but haven’t had the chance to wear them as we locked down

My entire RAF service (just under 20 yrs), my shoes were always bulled.

I attended the wedding of a fighter controller (Battlespace Controller sounds much punchier now), No 1s + swords event.

His Oxfords were absolute punk, so on the day of the wedding (nothing like planning ahead!), he asked me if I could assist.

Burnt off all the old polish (he was aghast initially) but in about 45 mins, had his shoes absolutely gleaming.

Trust me, says I, don’t want your fingerprints on them, let me put them on / lace them up. Like a lamb to the slaughter…

At the church (after we had all attended the local pub of course!), the vicar instructed the bride & groom to kneel.

I had treated the insteps of the shoes with black polish. On his left shoe instep, in big white letters (Tippex) = HE. On the right shoe instep, LP.

The verger nearly threw us (the escort party) out of the church, we were cackling so much!

Later on, we found out what hotel they were spending their first married night in…