I see from the news that the Government is intending to introduce legislation that will end all prosecutions, inquests and civil claims relating to what took place in Northern Ireland prior to 1998.

What are peoples thoughts on this? 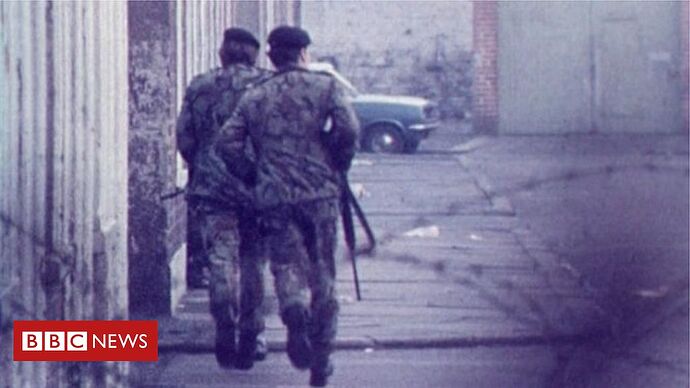 Boris Johnson says proposals to address past will allow people to "draw a line under the Troubles".

Two minds: it denies justice, but then if no one is going to prison anyway, and any case touched by the RMP is going to collapse, what justice is there to be had anyway?

Probably for the best - realistically, we should have done it as part of the GFA and set up a truth campaign then.

It’s a poo sandwich with no good outcomes, only crap ones…

IMO it’s for the courts to decide right Vs wrong (legal or not?), not the government.

Two minds: it denies justice, but then if no one is going to prison anyway, and any case touched by the RMP is going to collapse, what justice is there to be had anyway?

I was thinking this too, there is no way to make any of these cases against service personnel stick anyway due to the way that Statements were taken at the time so there is no point in moving forward with them.

You also have the fact that the “on the run’s were given a get out of jail free card by Tony Blair so cases against them will be bound to collapse as well.

IMO it’s for the courts to decide right Vs wrong (legal or not?), not the government.

The problem we have is that most of the evidence isn’t admissible in court due to the way it was gathered in 70’s & 80’s.

I’m not so sure about stopping all of the inquests but removing the Criminal Liability from those involved probably isn’t such a bad idea.

I’ve always found the furore about servicemen being even accused of crimes quite odd. Just the suggestion that a serviceman may not have complied with the law seems to many people to be impossible, and they react vehemently to it. Despite it happening in many other places. (Not to mention the fact that people think the prosecutions are brought by private Human Rights Lawyers, not the State and are incapable of separating the two issues… [COUGH Johnny Mercer COUGH]

But if people don’t want soldiers prosecuted, we can’t have a law which gives one side blanket immunity, and the other not, because that pretends that one side was always in the right, which it probably wasn’t.

Therefore, I think this is probably the best way forward, and none of the ways forward are good.

i can add no more than Angus who puts it perfectly.

I think the whole idea of prosecuting soldiers who were sent to do the bidding of the Government of the day, is a pile of sh-ite.

IRA murderers went free and the squaddies are victimised. The IRA tortured and murdered - often defenceless - victims and they can walk the streets with no conscience and no fear of being arrested.

How is that meant to be fair and transparent?

None of those who were screaming for soldiers to be prosecuted were ever in the ‘heat of the moment’ when a soldier has to make a split-second, life or death decision. They never had their own boots on the ground and never experienced what it was like to patrol down a street knowing that it was a high possibility that they were in a snipers crosshairs. Or patrolling past a vehicle not knowing whether it was going to explode at any second.

Facing hostile mobs on the street and having to be exceedingly restrained when being bricked, bottled, spat and shot at. Women offering a cup of tea with powdered glass in it.

No, those politicians had no frigging idea.

I don’t doubt for one moment that some of the decisions taken in the heat of the moment were the wrong ones but who the blue hell are politicians and human rights activists to judge only one side?

I only wish that I could spend 10 minutes in a locked room with Tony Blair. Sadly, I suspect that I’d be a long way down the list…