I was having a chat with a member of my committee about the proposed changes including the CCF’s coming under the Regions and I realised I don’t really get how the CCF works.

Who do the different sections actually report to? Who is actually in charge? Does it have its own Commandant or is it the 3 individual heads?

That is the chain of command; there’s then the support and policy that comes from the single services for each section. Activities have to be approved on Westminster. Who approves depends on what section is leading an activity, with the other sections being notified. There’s a whole industry (flowchart) about it for the CCF(RAF) depending on who’s doing what.

So it’s a bit complicated granted, but it certainly works for the CCF(Army), and I think this region changes will benefit the CCF(RAF) sections as we move to their model.

FWIW; the section I hang out with recently had a new headmaster join. The local Army Col. Cdts, and a few others came down to see the new head and explain what they do and how they support the section.
RAF TEST did nout.

TEST staff can be hit and miss, but it’s also worth bearing in mind that from my experience the CTTs seem to have higher staff numbers and more (or some) resources.

When I was on a unit with Army and RAF we would see the TEST SNCO once a month if that (the most he could fit in with his other schools) and we would have two SNCOs from the CTT each week, an Lt every other week and a Cpt once a month.

Only technically. You have to remember that some CCF units have existed for hundreds of years. They arn’t accountable in the same way as the Headteacher is the DDH. I assume there will be lots of changes in the CCF(RAF) sections, but whether the CCF(ARMY) will pay any attention is anyones guess.

No changes to come to CCF(A) at least as they already use the model that it seems we’re going to.

What’s your opinion given you’ve been on both sides of the coin?

No changes to come to CCF(A) at least as they already use the model that it seems we’re going to.

So how many “Regions” does the ACF have?

CCF (RAF) There are Test Areas similar to Regions - theses are headed by a Sqn Ldr (civil servant) and they look after the Test SNCO’s and other area test staff (Leadership and Mentors). Head of the CCF (RAF) is a Wing Co at HQAC who sits on the board with the 6 reg comdts etc, etc. There is also an admin team at HQAC same as wing/reg staff.

They sit in the Brigade areas 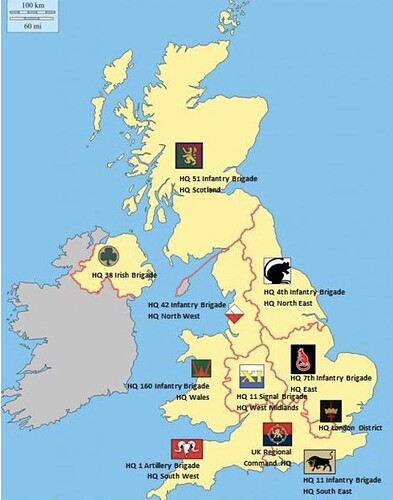 @speedbird’s summary is pretty good. Comdt RAFAC commands the CCF branch at HQ, and the TEST teams, but does not command the RAF sections which as stated report to the Cont Comd, the Head and RF&C Division MOD in that order.

This is why governance is so hard. HQAC (and HQ Land) have made good inroads into ensuring compliance with training safety standards by refusing financial support and MOD indemnity to activities which are not approved (by the TAF process and Westminster as stated) but cannot ultimately prevent them taking place - that’s the Head’s responsibility. The only option available is the nuclear one - close the CCF, or at least the section responsible. There is an annual reporting process (AAR) aimed at ensuring a CCF is compliant and functional (this has replaced the ‘Biennial Review’ although the latter takes place as a ceremonial function still, and the AAR didn’t take place in 2020 or 2021…

I expect to know more soon but at the moment my working hypothesis is no; RC will become 1RO for OCs TEST (and therefore RC will become 2RO for TEST SNCOs) but no other changes.

But I’m very much interested in finding out more!

Will this suited up introduction of SNCO CFAVs to CCF though?

Interesting question. Given that CCF(A) now have them I suspect it’s only a matter of time.

I thought this was already a thing

Only in Army sadly. We have a FS wanting to transfer but no. Why would we be allowed a DI?

And since CFC changes it is now Sgt RAFAC rather than Sgt (ATC).