All RAFAC uniformed CFAVs both ATC and CCF wear rank slides with RAF Air Cadets on the slide.

What do the ACF and SCC do?

What do the CCF army and CCF Navy do?

Most commonly I’ve seen they just have “CCF” on their slides. Sometimes with the school name, sometimes without.

ACF and SCC Senior Rates have “ACF” and “SCC” on their slides.

All RAFAC uniformed CFAVs both ATC and CCF wear rank slides with RAF Air Cadets on the slide.

They should do. A few old and bold CCF wear CCF on their slides in greens. Often where the SSI just orders a load from custom slide manufacturers and says to do the same for the army and RAF sections. It’s not as common now that the CFC came in and TEST SNCOs are getting better at enforcement.

CCF( Army) wear CCF on their slides and on the shoulder of their No2 uniform, sometimes with the regiment as well on the rank slides (but not No2) eg:
CCF
PWRR 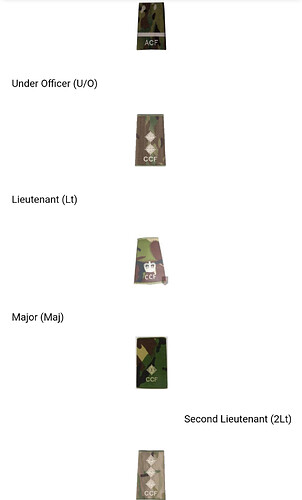 but I don’t know how legitimate that is. Essentially they do the same as the ACF but with one letter different.

Its CCF navy I’m really keen to know as today I saw something that for the first time ever made me want to walk over (in civvies) and dress some one down. I didnt.
But probably should have.

Will explain once I have 100% confirmation on the badging.

I think they have the old Wavy Navy rank slides, same as the SCC

Doesn’t mention any text on the rank slide 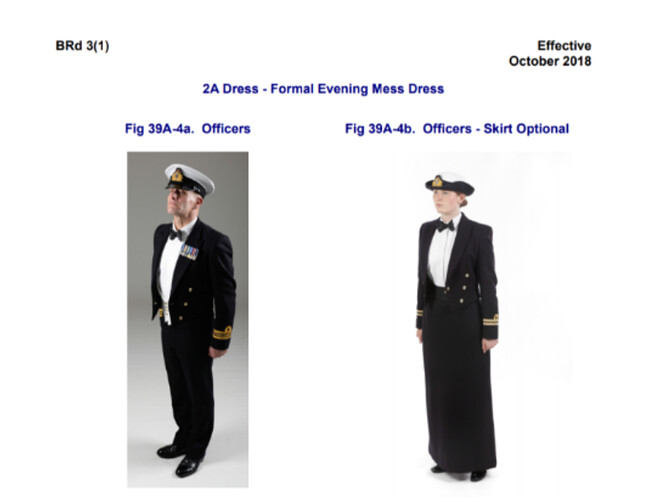 I’m just a former cadet but would like to offer some observations:

N.B. Cadet UOs wore the same rank slide as adult UOs (technically there should be ‘cadet’ rank slides but I think they were out of stock or something)

I found it very hard to get hold of the CCFRN dress regs, but I agree, CCFRN CFAVs (who will be officers*) wear the wavy navy rank braid but with no distinguishing letters, in all forms of dress, including rank tabs in combats. (I’ve seen the latter in ‘black on green’ subdued as well as less subdued variants.)

PS on the CCFRN - I fell out a bit with our visiting AI when he upbraided me for ‘cadets wearing incorrect cap badges’ - i.e. the old CCFRN cloth ones - when they should be wearing the regular RN cap badges now (though not the rank-specific ones for PO/CPO/WO).

I pointed out to him that not only had the RN not told me about the change - and at the time I was on their regular mailing list - but the dress regs were not in a location that I, as contingent commander, could access them. He went a bit quiet at that point.

Will explain once I have 100% confirmation on the badging.

I’m still trying to work out exactly what this Walter Mitty was wearing.

Imagine a person in MTP.
Naval rank
ccf side patch with little red square badge.
School badge on it also (I think it was that anyway, couldnt make that out).

But their naval rank was like a normal sub lieutenants but with a single VERTICAL short bar through the middle.

This was in Aldi and he was convincing the till girl that he was just back from deployment on operation with the… and I quote ‘new aircraft carrier force’.

He had desert tan boots on, the suede type specifically for hot environments.
And a white stable belt.

So that’s what I was going to ask What The Fudge over.

But just couldnt be bothered.

It was the Naval rank slide with the vertical element I was curious over.

Shame you didn’t get the school badge…

Tbh I was just too shocked

Sounds to me that this wouldn’t (I hope) be a CFAV. More likely an ex cadet who kept his kit and bought a weird rank slide off ebay or someone that bought the kit from a surplus store with the badges still on.

or someone that bought the kit from a surplus store with the badges still on.

This is my thought.
But I didn’t have the knowledge of CCF rank slide identifiers to be sure.

They certainly wernt a part of the forces or cadet force’s.

Only thing I can think of is the Midshipman insignia, I think they use it for Cadet Under Officers. Doesn’t fit with the Sub Lieutenant part of your description though. 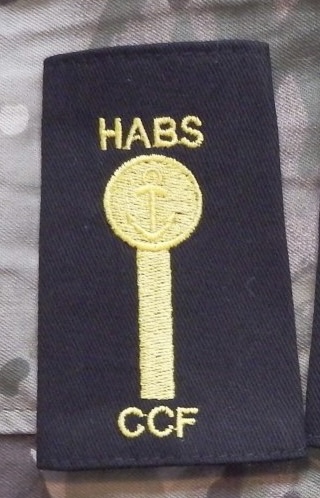 Yes, we did that when we had an RN cadet as ‘head of corps’ i.e. senior cadet for a contingent of nearly 200. Then the RN introduced CCFRN cadet ranks of Cdt CPO/Cdt WO so no need any more. (Previously they topped out at Cdt PO which is rather a low rank to be in charge of FS/WO2 in other sections!)

No wasnt that.
But interesting.

It was clearly a Walter Mitty thing.