Cadet of the Month

Does anyone run Cadet of the Month on squdron? We are considering it as part of some ideas to improve attendance on squadron - what criteria does everyone use for selection? Also, does anyone have a certificate template.

We do, it’s run by my Adj and the cadets & staff vote for it each month…

I remain unconvinced by the process as a month is only 8 parade nights, and it’s almost a popularity contest, although no one has won it twice yet this year.

Our cadet NCOs decide on who should get it. They are normally very fair, and pick someone who has gone above and beyond, attended lots of weekend activities or made some sort of improvement.
For us it works well.

Every month doesnt really work as its so short, so we use 3/4 months

The only thing to improve attendance is doing things and not using social media to promote activities. The latter does seem to negatively affect attendances. We had some PTT places a few months back and a parent complained that we didn’t put them on FB, until it was a reminder for the pick up, as their son would have come to the squadron, says it all really. They weren’t impressed when I said why we didn’t put these things on FB.

Unless the cadet of the month has a tangible prize it doesn’t seem to work any more, but even these seem to be not what they once were, in order to get cadets excited enough. As cadets we fought tooth and nail to be cadet of the month as it would result in an automatic annual camp place, getting offered (subject to meeting criteria) foreign camps and GS. Now annual camps are not a draw, the other camps have requirement / acceptance criteria attached to them, foreign camps don’t work quite as they did and we don’t have GS, plus there is the pressure from academia and parents worried that little Jane/John won’t get the grades they need, ignoring the benefits of being a cadet which compliment exam grades.

I don’t think a month is too short a timescale, except that attendance is affected by things over which we have no control and attendance IMO is key criteria along with doing things.

Run a points system to prevent it from being a popularity contest. Give points for attending and taking part in activities etc. If you would like the cadets to vote and have some say in it present the two highest scoring cadets to them to vote for.

We have a cadet of the quarter. The winner gets to decide how £150 gets spent on the cadets. Votes are from staff and senior NCO’s. Very simple system with virtually no admin. The money is generously donated by an anonymous benefactor so is self funded.

Run a points system to prevent it from being a popularity contest. Give points for attending and taking part in activities etc. If you would like the cadets to vote and have some say in it present the two highest scoring cadets to them to vote for.

That would an Admin Burden… something we’re trying to remove at all levels where possible especially with the limited staff at squadrons.

Surely that would be something an NCO could take charge of?

That’s precisely what it is

We’ve just started - basically we’re doing cadet of the year and the running totals (for uniform, attendance and any general “well done” points) make up cadet of the month, and then those are added to phys, academic and something else I can’t remember to give the cadet of the year score.

) and we also do Flight of the Month; we have Red, Blue and White (training) flight. Criteria includes: attendance, volunteering (ie. poppy selling, bag packing), attitude, uniform, etc. It’s a really good idea for inspiring the younger cadets and assure them that their interest and attitudes are noticed. I’ll grab one of my certificates for you and send a picture

Here’s a template (ps: card is better; one was paper and it was so flimsy aha) 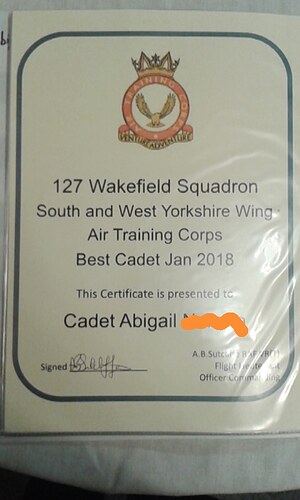