Hi, my daughter has just turned 18, she completed her DBS application some months ago, and was due to attend an AVIP course which got delayed due to the passing of the Queen, the next AVIP course isn’t until November.
The problem we have is that she was due to start the Junior Leaders course next week but has now been suspended, and is likely to be suspended for the 2nd course session.

She’s absolutely distraught, she’s worked hard throughout all of her time in the cadets, but it seems through no fault of her own she’s now going to miss the opportunity to attend Junior Leaders.

Not sure if there is any advice that can be given, but it seems despite starting the DBS process some 4-5 months ago, due to no guidance about AVIP requirements that’s it’s now all fallen apart for her.

A squadron near me has someone in a similar situation although for a significant camp rather than JL their Sqn Oc had a chat with the wing training officer and got a special AVIP course ran beyond the normal schedule. May get her to have that discussion? I have also had cadets in my squadron attend AVIPs in other wings due to scheduling issues with their work.

AVIP is a standard requirement for staying on past 18, so that bit is correct. However just straight up suspending them without a plan going forward isn’t really ideal.

A lot of AVIP courses are now run online, so there’s no reason why your daughter can’t attend one in another wing or region. For example I know there was one in Essex Wing this weekend! There is likely one being run most weekends somewhere in the organisation. And as I say, a lot are online now!

Failing all of that, a conversation needs to be had between your daughters OC, and WHQ/OC Wing to get dispensation for her to be able to attend JL without an AVIP.

Failing all of that, a conversation needs to be had between your daughters OC, and WHQ/OC Wing to get dispensation for her to be able to attend JL without an AVIP.

I’ve tried that before and got told in no uncertain terms that no dispensation was allowed and that the Cadet should’ve done it 6 months before they turned 18 not waited until the last possible moment, 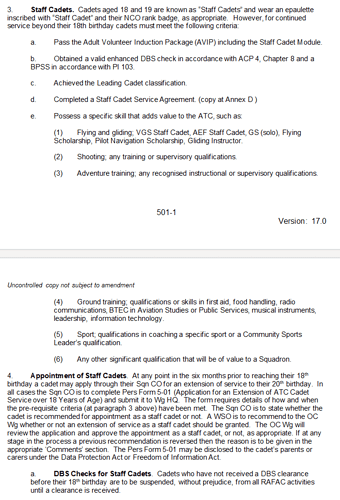 Has she got everything else in place, DBS, BPSS, Pers Form 5-01 etc, is it just the AVIP that is the issue? The only Cadets I’ve known be suspended when they reach 18 are those still waiting for their DBS.

Yes DBS in place for a short while now, she wasn’t made aware of that a PERS 5.01 was required until approx 1week ago, which I believe is with her CO to complete.

The argument will be that she has had the opportunity since she turned 17 1/2.

Depends when Wing have run the courses.

The frustrating part for us was that she was told she only had to do the DBS and be interviewed, the DBS was completed 2-3 months ago, only been advised re AVIP and all the other forms approx 6weeks ago, which if not cancelled would of been done in time.
We’ve asked about doing AVIP out of region but so far have not been offered any options, nor an online option.

London & South East run their AVIPs online. Your daughter’s OC should be able to make contact with the relevant people.

The frustrating part for us was that she was told she only had to do the DBS and be interviewed, the DBS was completed 2-3 months ago, only been advised re AVIP and all the other forms approx 6weeks ago

Sounds like a failing at Squadron level, is it a relatively new OC? If so she could be the first Cadet that they have put through the process, their os so much for a new OC to learn that they will unfortunately get things wrong.

It may be worth you sharing region/wing as you may get more targetted advice, with regards to AVIP each wing has their own approach to it