I have some friends from America who are part of the Civil Air Patrol(a kind of equivalent to the British ATC). They have told me about the many ranks which their cadets can progress through, 18 to be exact compared to the ATC’s 5 ranks.

Is there any kind of equivalent in rank between the 2 organisations or is it just not possible?

Also in the CAP, cadets can be promoted to Cadet Officer rank e.g. Cadet 2nd Lt. Are these cadets saluted? Surely they don’t have a commission of any sort so shouldn’t be.

In the pre-senior Cadet elements of the CAP, ranks are effectively the same as our classifications, but there are a lot more ‘award levels’ (18 sounds a bit too many though…will check on that). Therefore, there can be a lot of CAP Cadets holding apparently-high rank than might be expected for any sort of squadron scale/establishment. This is not the case within Senior sections (if it is a composite CAP squadron), where 18yrs+ members compete for exec/admin roles that require attainment of minimum rank for post.

CAP Cadets progress right through a sequence of rank/knowledge/competences, most of which a mandatory for the programme, but become partly-elective as a Cadet progresses.

There are some equivalancies between UK RAF Air Cadet ranks and CAP Cadet ranks, but not at the Cadet Officer level. Clearly within the CAP organisation itself, salutes/compliments are paid as appropriate, but it would be unusual (and only out of courtesy) for Cadet Officers of any cadet programme in the USA to be saluted by anyone outwith their chain of command. A similar situation exists for members of the Senior Section, where it is not unusual for eg an active duty (ie regular) USAF Corporal, or even say Airman to dual-hold Officer status (eg Capt/Maj) in the CAP. Such individuals would also be unlikely to receive salutes from regular or active reserves personnel, and that should be clarified by their uniform ranking and titles (in that they can wear air force pattern uniform, but with distinguishing marks and rank styles that indicate their status).

Commissions in the US are somewhat more complicated than over here in the UK, where things have become simpler over time. Full commissions (sometimes called Presidential commissions, I believe) are standard in the mainstream military (and equate closely to commissions authorised by the Sovereign here in the UK), but there are also State, Federal and Agency commissions, amongst others. If that hasn’t confused you enough, there are also Warrant Officers in the US military that are commissioned and saluted. And there’s not a single Warrant Officer in the entire USAF.

ps remember a big difference between the CAP and the ATC is that the Civil Air Patrol is also the official Auxiliary of the USAF, and can be tasked by the Federal Government of the USA on Homeland Security as well as SAR missions. That’s senior section personnel, and only when absolutely necessary (since there’s always the USAF, the USAFR, the individual state Air National Guards, and even Air Sections within some of the Army NG units)

From Wiki - so take from it what you wish…

Relationship to the military

Civil Air Patrol members are not subject to the Uniform Code of Military Justice and do not have command or authority over any members of the United States military. Similarly, military officers have no command authority over CAP members. As part of recognition of CAP’s service to the USAF, however, senior members in the grade of second lieutenant and above are allowed to wear “U.S.” collar insignia as an official part of their dress blue uniform. All CAP members are required to render military courtesies to all members of the US military and those of friendly foreign nations; however, as CAP officers are not commissioned by the President of the United States, military personnel are not required to render military courtesies to CAP personnel, though this can be done as a courtesy. CAP members are expected to render military courtesies to one another, though the implementation of this varies widely. Some squadrons are more military-orientated, with saluting and addressing by rank, while others are more informal.

If you do want a simple equivalency though, something like:
Phase 1 = cadet
Phase 2 = cpl
Phase 3 = sgt/FS
Phase 4 = CWO

Hopefully this’ll show correctly on ACC…see this link for the source chart. 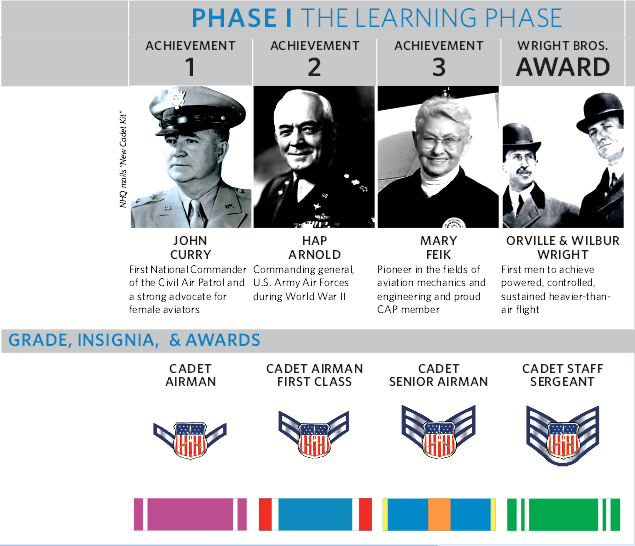 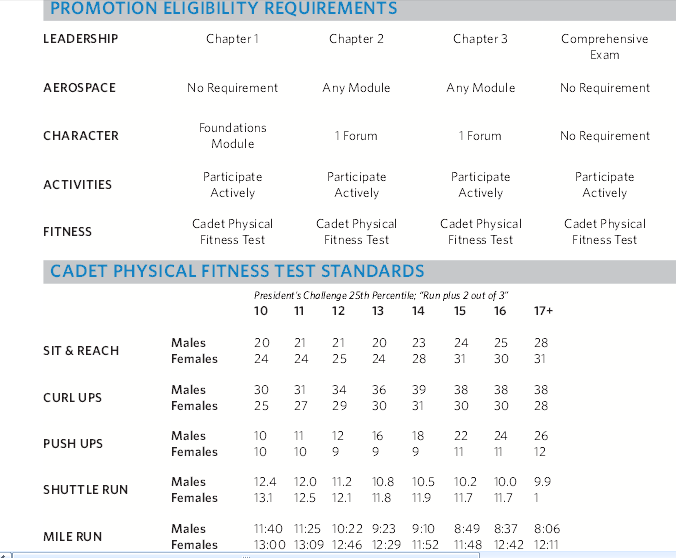 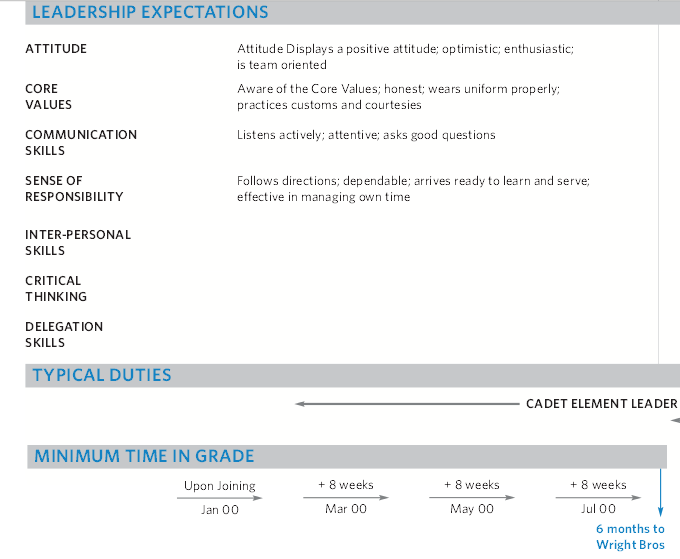 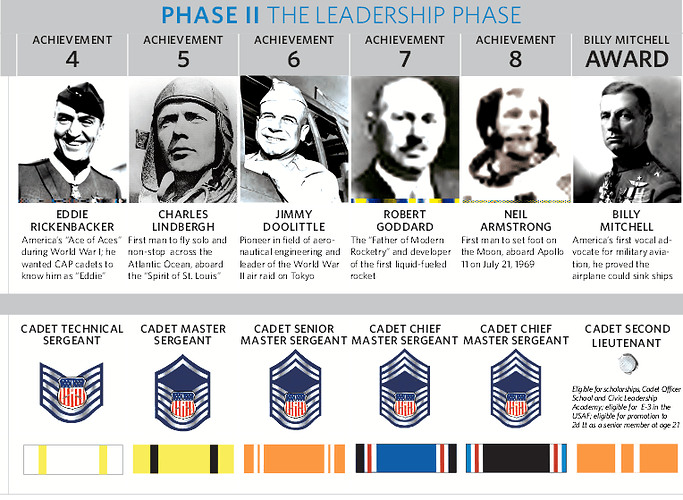 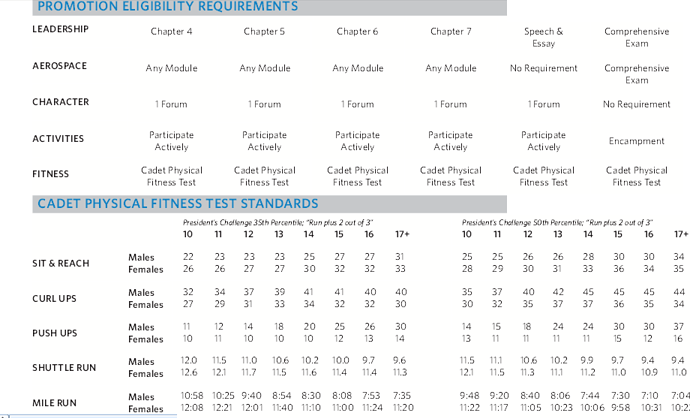 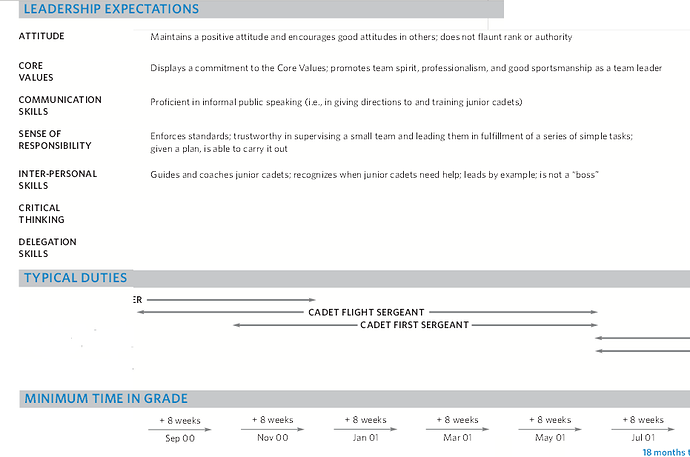 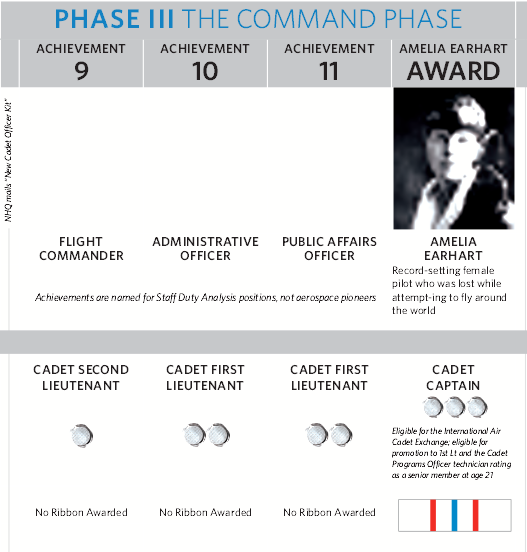 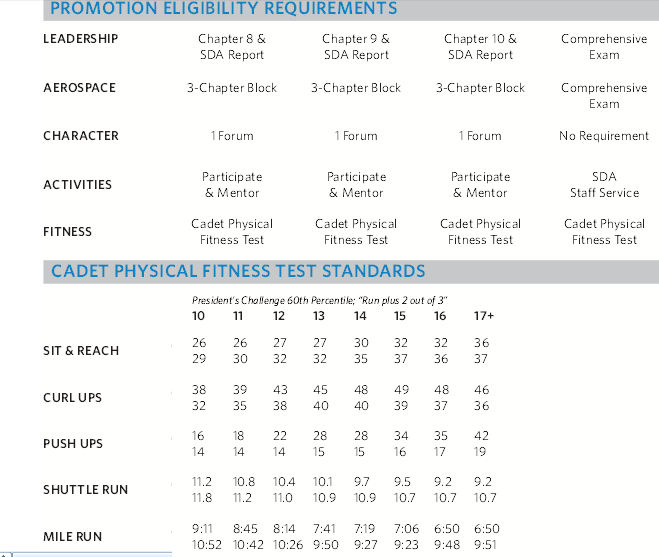 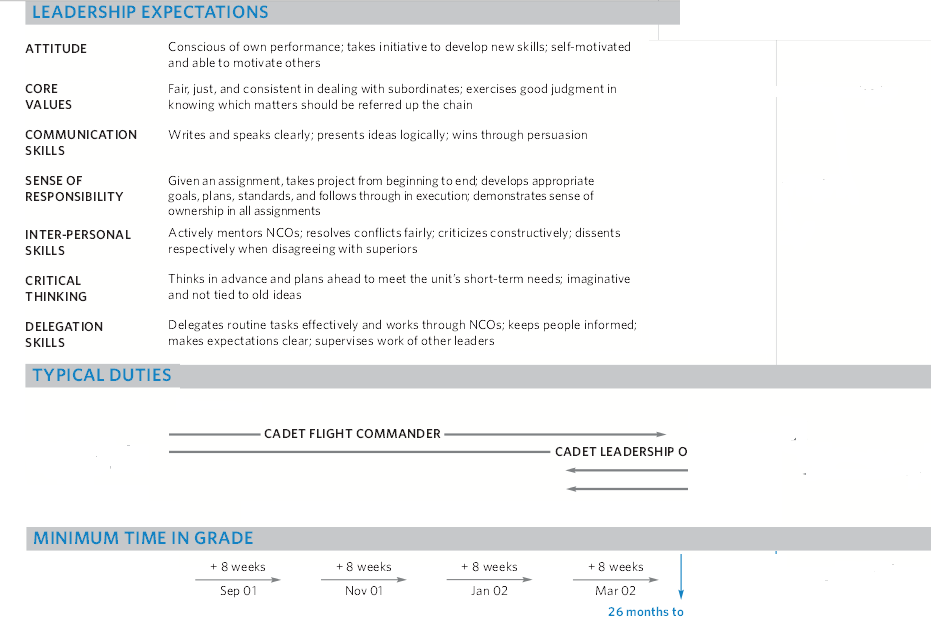 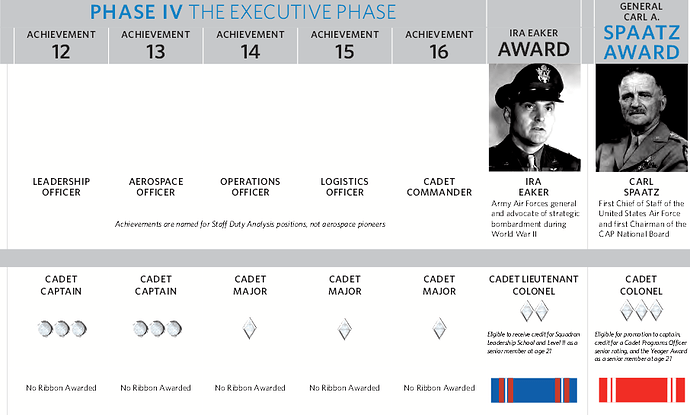 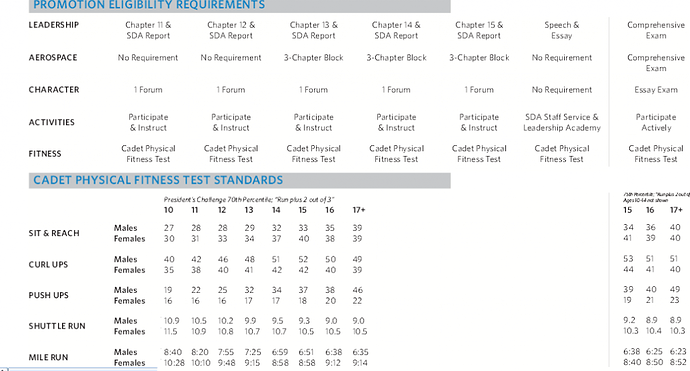 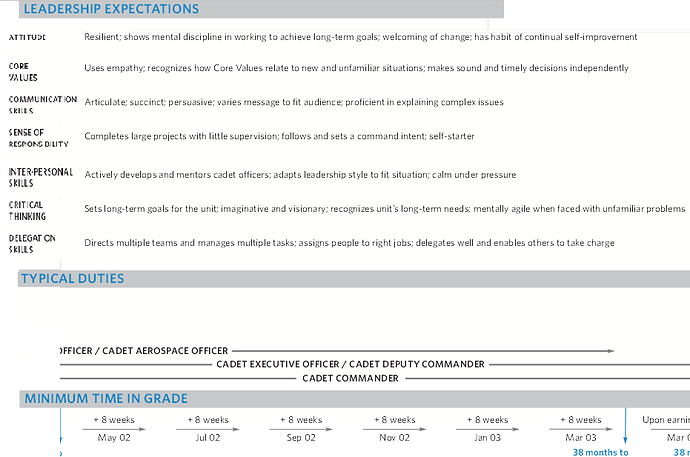 to be honest though, most regular US NCO ranks don’t correspond across that easily. Only officer grades go across but job wise it does not relate to UK

So if I read that correct… a promotion and “ribbon” every 8 weeks?

I know the yanks were bad, but jesus!

I don’t know if the 8-week schedule is minimal or mandatory…if Peregrine was still on ACC (that was Joe, the CAP EMT from New York), he could confirm this. I’ll maybe ask on Cadetstuff, if my account’s still live… 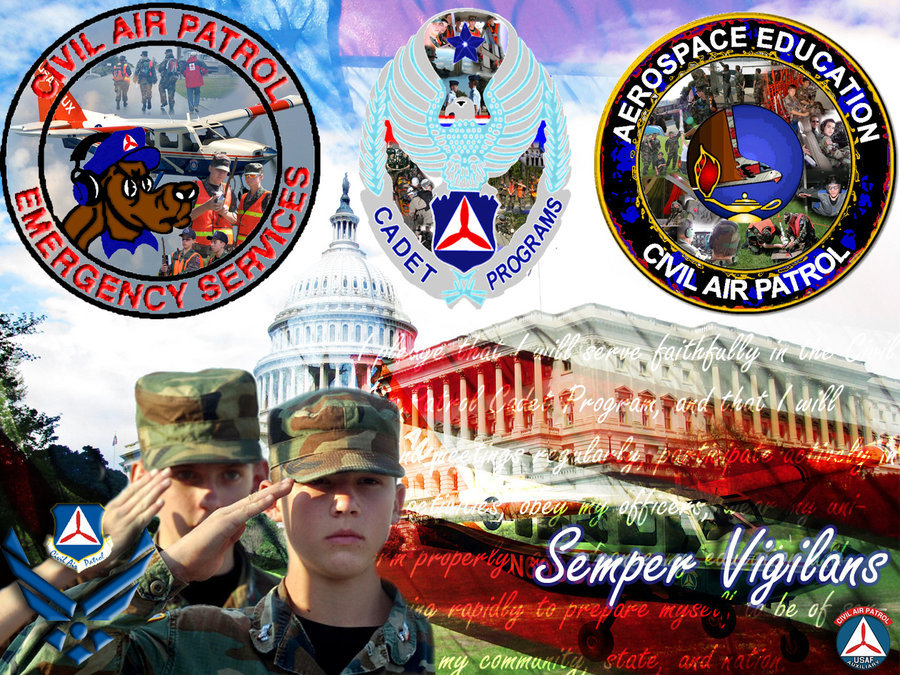 Perry Mason, thats 3 years start to end. I know cadets over here that have moved faster. I do know that the 8 weeks is a minimum for the guys I know over there.

I know cadets over here that have moved faster.

Not on my sqn!

I know a CAP cadet that came over with the IACE, I’ll speak to her on Facebook and maybe get her to see if she can reply to this thread with a difinitive answer.

She’s now a Aerospace Battlemanager equivilent in the USAF.

[quote=“Jonay1990” post=5905]I know a CAP cadet that came over with the IACE, I’ll speak to her on Facebook and maybe get her to see if she can reply to this thread with a difinitive answer.

Can you please ask her if these ribbons are all just CAP, CAP cadets that go on to join the ROTC, or also AFJROTC direct?

ps mods, this thread isn’t really meant to be in the Introductions section, but hey ho, it is…

I was in the CAP for about a year and a half and the original poster is right, there are about 18 different ranks in their organisation. I was put in as a 2nd Lt senior member due to my equivilant rank in the UK (but I never wore a CAP uniform) - I had to be part of their organisation to work with the cadets and that means holding a CAP rank.

Close study indicated that the cadets are ‘promoted’ through the system having completed exams, assessments and fitness tests. Which meant you could end up with very booksmart and fit cadets who didn’t possess a single ounce of leadership ability. Their academic syllabus and promotion are closely linked and not seperate like in the ATC.

My experience was that anything below Cdt 2nd Lt were roughly the equviliant of a decent ATC cadet (i.e. one without rank) and anything over 2nd Lt started to operate and work like a Cpl and above. However, there is a massive leap in ability and standard between a Cdt Maj and a Cdt Col.

On the composite Sqn I was on, the cadet officers ran the majority of the cadet-side of the Squadron. The Senior Members lead the cadet programme at a strategic level at the Squadron but weren’t really involved in the delivery of parade nights and activity organisation.

…very very different organisation and ethos to the ATC. Also, I always found it interesting that shooting was hardly ever done in the CAP where I was and the unit held/stored no weapons or ammo.

Also, I always found it interesting that shooting was hardly ever done in the CAP where I was and the unit held/stored no weapons or ammo.

Wow, Wif, blast from the past. I google my name at work, and this comes up! If anyone has any questions concerning CAP, I am a former member who still has an encyclopedic knowledge of it.

Joe, great to see you back! I take it from your comment above that you’re totally finished with CAP, now? But still working as an EMT?

I’m very rarely on ACC these days. Not through choice, it’s due to constantly-increased workloads from my day-job

Please do keep in contact with us, and the ATC/RAF Air Cadets, via this forum. Your experience from the US perspective was always so interesting