Anybody got uniform tips for a crew neck jumper?

All of the NCOs on my squadron have v-necks, so I don’t really know what I should be doing. It looks kind of frayed on the arms, and the sleeves aren’t long enough to roll on the cuffs. Does anybody know what I can do to make a crew neck jumper look better?

Ask for a V-neck unless you’re keeping the crew neck to look cool on camp (which I admittedly did for a while!)

Give it a good go with a clothes brush. You can also find ‘shavers’ which will help remove any fluffiness and pilling of the jersey.

But, frankly, that’s an old jersey of the previous pattern, which sounds like it’s reaching the end of its life and doesn’t actually fit you.
One would hope that it’s only a temporary issue and that your Sqn has a new one on order.

When I put it in the wash it made a gaping hole, lol. Managed to sew it back up. No plans from the Sqn to switch them out as far as I know, it’s kind of a lottery when you get issued blues on whether you get a v-neck or a crew neck. Around half the squadron has one.

I thought crew was the current pattern? Has it changed again? Aside from going to that weird purple colour?

No, the ribbed crew neck was the old pattern. We changed to the flat weave v-neck some years back now.

When I put it in the wash it made a gaping hole, lol. Managed to sew it back up.

It can be difficult as a cadet to raise these issues but that’s an unserviceable item of uniform.
By rights, your squadron should have ceased issuing the crewneck jerseys years back anyway.

Definitely request a new one. It may take a little while to arrive but you should not have to ‘make the best’ of something in such a poor state of repair.
Every cadet is entitled to a complete, serviceable set of blues and your sqn CAN demand more from stores.

We still have lots of crew neck jumpers about. And the the big wigs in the RAF all do their social media in Crew neck.

Our NCO’s have been told to change to V-Neck on recent NCO courses, but we can’t get new kit day the drop of a hat, so will continue to use them.

It does sound like you’ve been issued an old one, and if the sleeves don’t roll up, it sounds like it might be a bad fit.

Nothing really for it than to request to swap it out.

I only got it a few months ago, how would I bring this up?

Just approach your staff. Often the point of contact for this would be your Sqn WO or SNCO is it is their job to ensure that everyone looks smart and properly turned-out, but if you have a particular ‘stores officer’ then you could raise it with them.

Just explain that it doesn’t fit (since the sleeves are too short), it was frayed when you were given it and that it came out of the wash with a hole in it.

It shouldn’t be a problem.

Both sleeves are like this usually. I try and keep them neat but it’s getting harder to maintain. 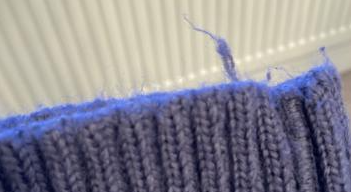 Our NCO’s have been told to change to V-Neck on recent NCO courses, but we can’t get new kit day the drop of a hat, so will continue to use them.

Hope you passed that up the CoC. Not all squadrons have the capability of just swapping out jumpers!!

Whenever there’s a change of jersey there is always the crossover period, and then a year or so later the official ‘nobody should be wearing the old ones’ date.

Given that I’ve never had any trouble getting jerseys out of stores in the past 20 years, or whatever, I’m always a bit doubtful when a squadron says that they haven’t been able to get the correct pattern after 7 years or however long it’s been since we changed.

I never loose sleep over people wearing a crewneck jersey, but I do get frustrated when I know that there are squadrons out there with stores full of serviceable kit, and in other places cadets are being issued with old pattern uniform with holes in it.

We can definitely improve our supply situation with some joined up thinking.