Some time ago (in the knee jerk style of many things in the RAFAC), use of drones on Squadrons was banned, pending (presumably), some kind of complex training syllabus from 2FTS or other team.

Since a questionnaire in August last year there has been radio silence.

Anyone have any ideas what’s actually going on now?

As a Squadron we own around £4000 of DJI drone kit, and had been successfully delivering training to our cadets, it was a great tool, fitted very well in ASTRA, and was an opportunity to provide training in something the cadets would actually enjoy. It’s therefore frustrating that we’ve been unable to do anything for a long time.

nyone have any ideas what’s actually going on now?

Nothing heard as yet

However it’s not an RAFAC rule per se, it comes from a defence wide update on use of UAVs.

Since a questionnaire in August last year there has been radio silence.

This ties in to aerospace.laser’s “Cadet Drone Flying Courses” whereby she guides cadets through the CAA Drone Code and waits for them to complete the 40 question quiz to get their official Flyer ID.

She’s catagoric that nothing will be coming out until atleast next year.

Personally I encourage units to but BetaFPV Cetus kits because they are perfect to flying indoors and you’d struggle to hurt a cadet with one. 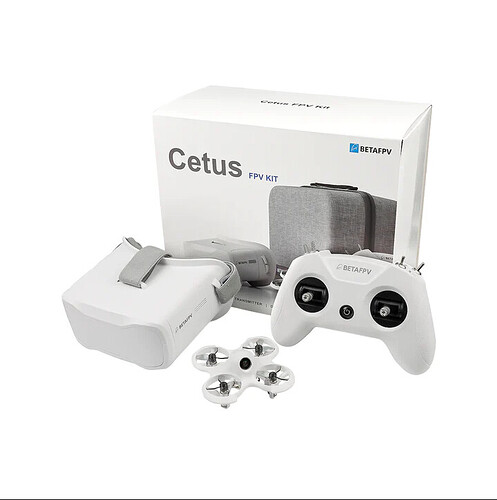 This is the one I’ve been looking at. Definitely worth it?

Does it take long to get to grips with? I’ve got a DJI mini, but don’t want to let cadets loose with it!

This ties in to aerospace.laser’s “Cadet Drone Flying Courses” whereby she guides cadets through the CAA Drone Code and waits for them to complete the 40 question quiz to get their official Flyer ID.

She’s catagoric that nothing will be coming out until atleast next year.

Brilliant….so exactly what we were already doing, but now we needed to wait 2 years for someone else to claim the credit….(and no doubt a Pat on the back commendation)….standard for this organisation.

I’ve really enjoyed playing with it, and it takes knocks against walls etc without any damage (so far). rig up some hoops or flags etc to fly through and you can have a lot of fun.
It’s certainly worthwhile buying the extra batteries as you only for 3-4 min of flight and they take longer than that to charge up!

we were already doing

Well, thats good for your sqn then. someone at HQ/LaSER seems to be of the impression some units aren’t doing that, hense the ban.

It’s flying. So of course HQ wants to limit it.

Well, thats good for your sqn then. someone at HQ/LaSER seems to be of the impression some units aren’t doing that, hense the ban.

The point being that what happens in my Region/Wing is nothing to do with LASER, despite what they may think, the world doesn’t revolve around them. Quite why this isn’t a HQAC lead thing I don’t know.

I don’t see why this organisation is so far behind the rest of the world in this sort of thing.

RAFAC: ban, hear about someone through the 2FTS grapevine who’s doing it, ask them to deliver something, wait out for years, shoddy product arrives, all SME’s moan as the product isn’t fit for purpose.

Most things in the corps are being lead by 1 region or another, be it NCO training or Drone Flying or QAIC.
This isn’t new.

Ah right, guess we just carry on then eh?

I appreciate people are frustrated but let’s not get carried away.

The current situation sucks unless you’re in Laser and special, by the sounds of it.

Who do we approach to push this out RAFAC wide and how?

unless you’re in Laser and special, by the sounds of it.

We’re not allowed to use them either. The course that’s being run is the online thing over teams. Not a physical flying course.

Well then surely that should be open to anyone with a computer and a login ?

We’ve also got a really good (and expensive) drone, locked in a cupboard. We were operating perfectly well within BMFA rules and insurance, until the ban. With several aviation professionals and pilots on the Sqn, we were well aware of the issues and how to operate.

I’m told that the group looking at future drone flying in RAFAC are considering everyone having to do A2 training, rather than using the BMFA approach. Seems unnecessary and over complicated to me, although it could work well if the training is sufficiently available and deliverable.

I just want cadets to be able to fly a drone again, which is (was) the most affordable and accessible flying experience for them.

Although a means of Cadets and CFAV being able to access A2 through RAFAC would be a good additional for some progressive training on Drones, however I doubt that will come in…

seems unnecessary and over complicated

Well that will be the option they go for then